It has really been no secret that Dji has had the title of the leading company in the civilian drone industry for quite some time, as this is exactly what The Economist named them two years ago. Last year they celebrated their ten-year anniversary, and they have had great success in maintaining a product line that meshes well with amateur and full-blown professional use of drones.

The success of the Phantom product line has been a pleasure for anyone who loves drones to witness, and they deserve a large amount of credit for making a product that is fairly easy to use, but still capable of shooting 4k video and utilizing the highest levels of new technology that is available out there. The Phantom line was very successful at drawing many to purchase their first drone, and stick loyally with the brand through thick and thin.

One of the most remarkable things about Dji is that there has not been altogether too much “thin” to have to stick through. They have made some mistakes as any innovative company has, but have really stayed on top of fulfilling the desire that consumers have to see modifications to existing models, as well as continuing to introduce new products.

The Revealing of the Mavic

When the DJI Mavic was released last September, it truly was the Dji new drone that oozed difference while being so compact. Easy enough to pack for adventurers and explorers worldwide, its compact likeness did not deter from features, and collision avoidance technology and the ability to gather awesome images wowed many.

The Mavic had 24 high-performing computing cores, and all-new transmission system, 5 vision sensors, as well as a precision hover. The pilots out there that preferred a certain element of sturdiness really still love the Phantom 4, that offers a flight time of 28 minutes, improved balance from the Phantom 3, and the ability to see a 720p view of everything the camera is recording.

The Mavic is a device that puts the pilot at the helm of a craft whose portability is one of its main assets. This has been one of its best selling points, and one of the reasons why its in a bit different category then the Inspire series: Even though it is chock full of awesome features, there still may be a few more leaning towards the hobbyist side of things then the full-blown film professional, which is just fine in any product realm. 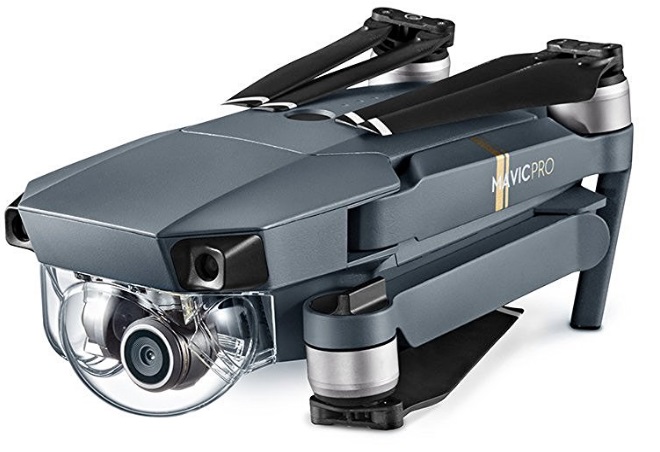 A little over two years ago, the Dji Inspire 1 was released, touting a design that was incredibly advanced for how ready-to-fly it is. Many thousands of hours of research were completed while designing this drone, that packed in a very high amount of aerial technology into a simple, ready-to-fly package.

Carbon Fiber arms gave the pilot the strength to maneuver in the air, and users loved how they could move out of the camera’s way with the simple flick of a switch. The all-new 13-inch quick release motors were reinforced with a revolutionary carbon fiber compound material, to ensure stellar performance with heightened stability.

The Inspire drone also featured brushless motors that have since become the standard in the industry: they integrated curved magnets that provided a better fit around the edges of the motor. The magnets inside were designed to eliminate airflow gaps within the motor, and promoted overall efficiency of the craft.

There were also very advanced Electronic Speed Controllers that were customized specifically for the Inspire 1 offering features like closed loop torque control, adding to the reliability of the craft. The Inspire 1 also came out blazing with a fully integrated battery that manages itself, and uses advanced algorithms to calculate the aircraft’s distance.

The main controller for the Dji Inspire 1 was constructed as a true “brain” of sorts, that received thousands of data bits every second, and even calculated environmental conditions in lightening-fast real time. Dji’s Inertial Measurement Unit incorporated an accelerometer and a 6-axis gyroscope to keep a close eye on changes with tilt and movement, which made this craft better at holding its position. 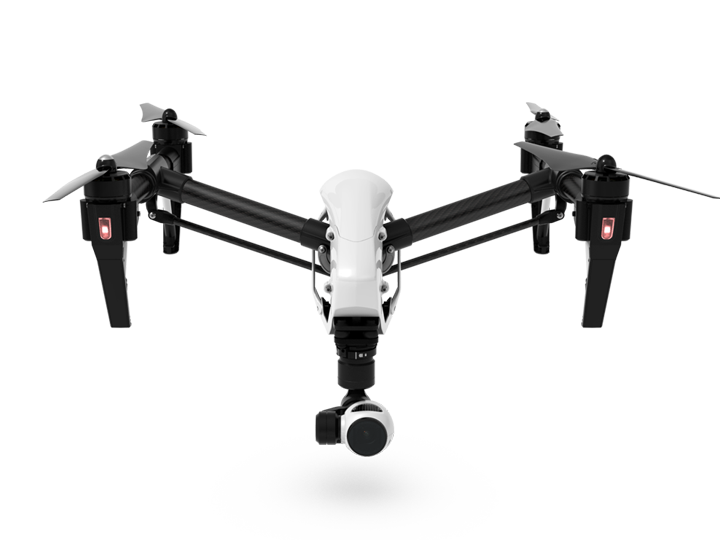 The Many Features Of Inspire 2 Unveiled

Those who are looking forward to what the DJI new drone market will over definitely have a lot to celebrate with the Inspire 2. The Inspire 1 was expensive, but not astronomically out of reach for the consumer that was looking for a high-quality piece of equipment.

Here are some frequently asked questions about the Dji inspire 2 rumors, with a bit of solid information for excited pilots to chew on.

When is the dji inspire 2 release date?
The official release date was Nov. 8th of last year. It has long been awaited for the last two years, and will be excitingly more powerful than the original.

How much is it going to cost?
The DJI Inspire 2 price will sit at right around $2,999. Given its very high-end features and also high top speed, it is not an entirely bad thing that this may keep some absolute beginners a distance away from it.

What are the updates from Inspire 1?
One of the main upgrades from the Inspire 1 is the body it is constructed with. This is a new magnesium-aluminum hull that is there for the purpose of lowering the overall weight of the craft. Top speed has increased pretty impressively: it went from 50 miles per hour all the way up to 67. The biggest true upgrade is that the inspire 2 actually has two cameras: the main one is used for capturing footage from a 3-axis gimbal, and the second one is a two-axis camera on the front that the pilot can use to view the drone itself, and check on its whereabouts as well as next positioning.

How Good is the Image Quality?
The image processing system inside this new quadcopter can actually capture 5.2K video, and it can complete that task at a 4.2Gbps bitrate. The system overall can also support formats of video compression like Apple ProRes, and you can also purchase the inspire 2 with the X5S camera, which plays well with up to 10 different cameras. For still images, you can take 30 MP stills while in DNG RAW mode.

How Long can the Inspire 2 Fly?
The average flight time with included cameras as payload is right at 25 minutes. 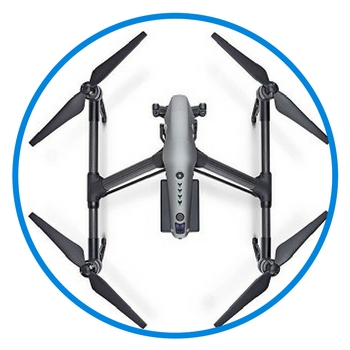 This will be known for quite a long time as a drone that will dominate the photo and film making arenas in many ways. The key reasons for this are that there is more speed, a bit more battery life, and a high amount of flexibility with lenses and image capturing. 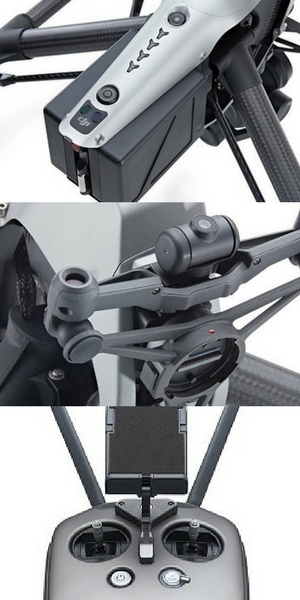 – In just 4 seconds, you can get the speed up to 50 MPH, and climbing up in the air is done at a rate of 7m per second. As far as those who are curious about what kind of images and video they can get with the DJI Inspire 2, you are capable of using a Micro Four Thirds 20.8 MP Zenmuse X5S, or the 1-inch sensor 20MP Zenmuse X45 to nail down 5.2K video.

– If you are not lucky enough to have the aid from a friend during flight, the new inspire drone can achieve some very difficult-to-get shots, thanks to its incredibly advanced navigation system. There are vision sensors on the front and bottom of the drone, and obstacle avoidance as good a trait as it was with the Phantom 4 and Mavic.

– The master and slave controller range is able to extend to 328 feet, and the pilot has the choice of switching between 5.8 GHz and 2.4 GHz for choices of frequency. The video from the forward and Zenmuse cameras are both sent over the same stream, so if you are operating in a team, you must stick under 328 feet apart.

– This new drone has a dual-battery system that allows it to be in the air for 27 minutes, and if there is a failure in any way with one of the batteries, it is still easy to safely bring it to landing. These batteries actually self-heat, and can still give the pilot power in temperatures down to -4 degrees Fahrenheit, although savvy users may not want to pilot it anywhere under around 20 to 15 degrees Fahrenheit, just under the guise of Murphy’s Law.

– Another new feature on the DJI Inspire 2 is Overhead avoidance: the down and forward sensors on the craft give it safety and stability during its flight, and avoiding other obstacles as well as returning to home will take place even with complete control failure. The flight controls have been completely revamped: assets such as active track and tapflight make for a better experience for pilots without an assistant to man the camera. 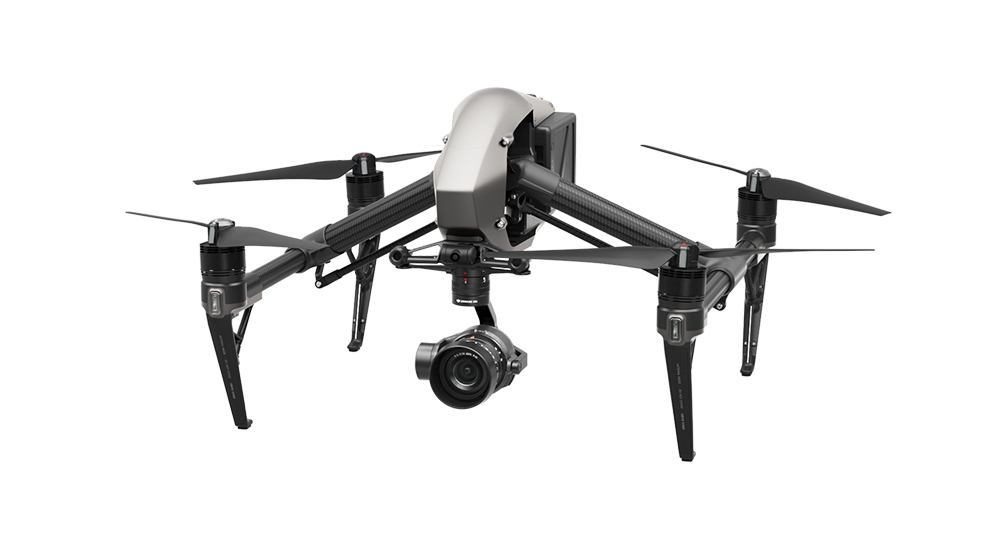 Many of the Dji inspire 2 rumors were regarding the double-camera feature, and the heightened flight time, which is truly an asset for the creative types that will be using it. For the most part, this is about as good a drone as you could imagine for anyone working on a set and trying to get the best footage they possibly can.

The need for a higher payload doesn’t really come into play unless you get amazingly choosy with the types of cameras you want to use. This is also understandable with those who know the exact vision they want to capture with their new quadcopter; Dji for the most part flexes their muscles again and portrays how they have such a dominance in the market. Eager pilots who had to wait two years for the Dji new drone won’t be let down in the least, and we definitely deem the new features well worth the price.