The Federal Aviation Administration (FAA) is adding more rules regarding drone regulation to take effect within the next few years. The latest addition would allow the government to track nearly all drones that fly in the United States.

The FAA expects drones in the U.S to comply with this new rule within three years and will require drones to use a remote ID system, making it possible for third parties to track them. This measure is to help law enforcement identify unauthorized drones that may pose a security threat.

Law enforcement and homeland security agencies have been demanding a tracking rule in response to the growing number of drone threats. These include a handful of close calls that halted airline flights near airports, collisions with other aircraft, or use of the devices by terrorists around the world.

On the other hand, this new rule could allow for wider adoption of commercial drone use. It would be a milestone for drone delivery especially at companies such as Amazon, Uber, and Google’s parent company, Alphabet. These businesses are racing to utilize unmanned aircraft to save on costs and delivery time.

There has been some amount of concern regarding this new tracking implementation, especially amongst recreational drone operators. While most industries recognize the need for some type of drone tracking system, recreational fliers have concerns about government monitoring the public. 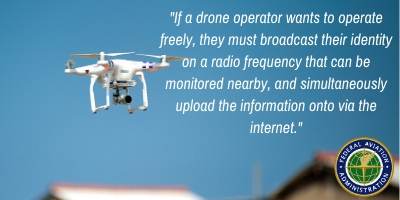 Once the rule goes into effect, if a drone operator wants to operate freely, they must broadcast their identity on a radio frequency that can be monitored nearby, and simultaneously upload the information onto via the internet. This is so other nearby drones and aircraft can steer clear and local police could identify rogue operators.

The FAA would allow users to choose a more limited option of uploading the information to the internet only but would be restricted to flying only within 400 feet of the operator.

There are limited exceptions to this for groups such as model-airplane operators, but all drones weighing more than .55 pounds would be required to follow the FAA’s proposal.

Other criticisms have come from across the country including Jonathan Rupperecht, a Florida based lawyer who specializes in drone and aviation cases. He points out that the FAA rarely prosecutes violations of drone regulations and suggests focusing on locations that need protecting, instead of creating an unwieldy tracking system.

There have been more than 8,700 reports received by the FAA of drones flying in prohibited areas or in an unsafe manner. During the warmer months, reports grow to nearly 200 per month. While most reported incidents are minor, these large numbers show that some drone users are ignoring the rules.

Another push for this rule is the growing fear of drones being used as terrorist weapons. FBI Director Christopher Wray warned lawmakers last year that drones are posing a steadily escalating threat.

This proposal wouldn’t take effect for three years once finalized, so commercial operations won’t be possible until then. However, this added regulation could lead to the added safety of drone operators across the country and civilians.

What do you think of this new rule the FAA has proposed? Will it help or hinder drone usage in the United States? Let us know in the comments!