The drone industry has never been in a better place than it is today. Drones are used by governments, major corporations, and – of course – consumer hobbyists like ourselves. Most people having at least a rough idea of what a “quadcopter” is and are getting increasingly used to the sight of flying quadcopters.

However, years of not-so-ethical use by the military and fear of the idea of a flying camera means that some people are still uncomfortable with quadcopters and their potential to invade one’s privacy.

And with the influx of novice pilots to the hobby – which is overall a very good thing – comes a great deal of people who are flying quadcopters but don’t know the proper etiquette for doing so.

It still seems like at least once a month we read stories about drone pilots getting into trouble or somebody getting angry at someone for flying a drone in a public place.

The primary responsibility for improving the image of quadcopters lies with us – the owners and operators of these unmanned vehicles. Here’s some common questions people have about flying quadcopters as well as three rules of flying that you should keep in mind in all situations.

These are the three basic rules that we keep in mind whenever we’re out flying quadcopters for a photoshoot, a review test, or even just for fun. Novice and experienced pilots alike should make these three concerns their top priority whenever they’re flying RC quadcopters.

“Don’t be a jerk” seems like a pretty obvious rule and a pretty easy thing to do – and it is! But you’d be surprised how often certain drone pilots forget the importance of putting others first. 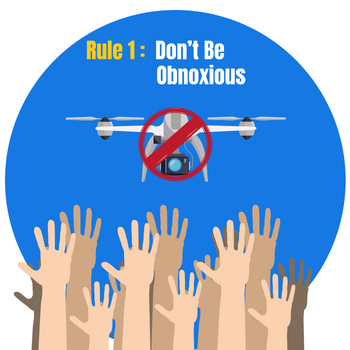 The majority of the public you will run into when you are out flying quadcopters have very little knowledge about the subject of drones. It’s new and novel. It’s common when we’re out flying that we will attract a crowd.

The good news is that the vast majority of the time people are polite, interested, and even look upon what I’m doing with approval. They want to know how high and far it will go. They want to look through my Fatshark FPV Goggles.

But you can make sure that people are polite and courteous by taking care to not be annoying. Don’t fly over large crowds of people and don’t fly low over people’s heads. Multirotor quadcopters are noisy, so don’t fly near peoples’ houses when they’re trying to sleep.

Be sensitive to the environment and situation. If you think you might be disturbing someone by flying your quadcopter, find a different place to fly.

Just remember the Golden Rule: treat others the way you want to be treated. You and I are pretty comfortable with quadcopters, but would we want one buzzing by our head at all times? Of course not!

Modern quadcopters are pretty safe. Small quadcopters in particular are lightweight and have stock propellers that are not as sharp as other larger multirotors.

However, even a small quadcopter with a lot of safety features could do some damage if it fell out of the sky and hit someone or something. It’s your responsibility to minimize that risk. 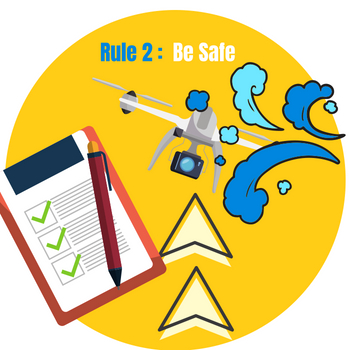 The first time you take your drone out, read the manual carefully. These things are usually pretty short – it won’t take you that long to check out the major safety precautions at least.

Go through a pre-flight checklist just like a real pilot – do the propellers look good? Have you calibrated everything fairly recently? Again, simply looking over your drone won’t take more than a couple minutes, and it’s worth it to eliminate the risk of hitting somebody.

Once you’re in the air, as long as you’re not working on some professional job that involves getting high in the air or into other hard-to-reach places, try to keep your drone in sight.

Don’t fly higher than local regulations in your area allow. Stay away from people and birds. Don’t fly in high winds, and fly slowly when you’re still getting used to the vehicle’s controls.

Sure, we don’t like to be reminded of all the safety stuff. You want to get out there and start pushing your new flying quadcopters to the limit – we understand the impulse! But as much as we may want to skip the safety steps, I think most of us want to avoid causing damage to people or property even more. So these are some simple common sense things you can do to make sure you’re following rule number two.

We live in an age where people want to hold onto every small piece of privacy they have left, and with good reason. Don’t take photos or videos of peoples’ faces without their permission. 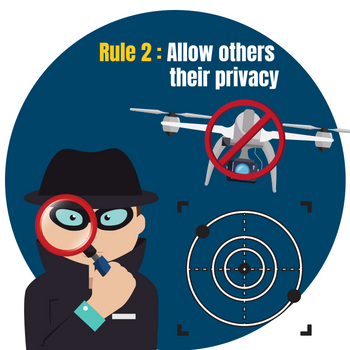 This rule comes with some legal concerns, too. In most areas you can’t take and publish photos of people without their written permission. Even having them in the background is kind of legally gray.

And in the US, Commercial drones that weigh over half a pound may not be flown over a group of people under any circumstances.

In short, avoid the drama. Keep your flying quadcopters away from groups of people and strangers and don’t take photos if you’re not positive you’re cleared to do so. And if someone asks you to fly somewhere away from them (and you’re not doing commercial drone photography with a permit), be reasonable and move somewhere else.

If you’re a first-time flyer whose confusion with flying quadcopters comes from not knowing what to buy or how to operate the controls on a drone, you can learn more by reading this other article from our site, which is a complete beginner’s guide to flying drones.

But if you’re just looking for a quick guide to some of the most common concerns about how to fly quadcopters appropriately, read on!

How to start flying quadcopters

Again, our beginner’s guide to flying drones (which we linked to in the last paragraph) covers the important details of how to start flying quadcopters. But the first thing you’re going to need is, obviously, a quadcopter of some kind. Quality beginner quadcopters like those sold by Altair Aerial are now available for only around $100, sometimes cheaper if you’re willing to miss out on a few features. 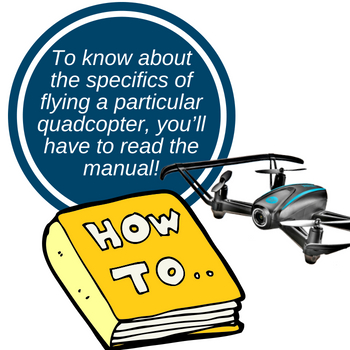 From there, you just need to find an open area to practice in and start flying! Most quadcopter controllers have two analog sticks – one to turn and face a particular direction, one to start moving forward/backward/up/down. To know about the specifics of flying a particular quadcopter, you’ll have to read the manual!

Rules for flying quadcopters in wind

Honestly, the number one rule for flying quadcopters in wind is this: don’t do it. Most consumer quadcopters shouldn’t be flown in winds of more than 10 miles per hour and even the best drones shouldn’t be flown above whatever their manual lists as the wind limit. It’s not worth destroying an expensive piece of equipment just to get out on a windy day!

If you HAVE to fly in wind, or you have a quadcopter that’s rated for winds faster than 10mph, generally the main thing you need to learn is how to compensate for wind with the analog sticks.

So for example, if the wind’s pushing your drone to the right, you have to push the stick to the left to move right at a slower speed or to hold still in the air. It’s a different way of thinking about things that can take some time to master.

However, we can’t stress this enough – in 99 percent of cases, you shouldn’t fly in wind! It violates our second rule of flying quadcopters.

Rules for flying a quadcopter with camera

Flying a quadcopter with a camera is much like flying any other quadcopter, although you usually have to get used to balancing a phone or tablet (which you’ll use to control the camera features) as well as the analog radio transmitter you’re using to fly the drone. If you want some rules for taking good pictures, we have another article on that topic here.

What is it like flying a quadcopter for the first time?

The number one thing you need to understand about flying a quadcopter for the first time is that you are going to crash. You just are. We all did it, and you will too. That’s why it’s so important to start on a durable quadcopter that can take a crash or two and still fly.

Beyond that, it’s going to be difficult for you to think about moving in three dimensions at first. It’s pretty easy for us as humans to understand left, right, forwards, and backwards, but not so much up and down. You’re also going to be surprised at how hard even a small wind will pull your vehicle out of position.

However, flying quadcopters is easier than most people think and usually after your first flight session or two you’ll start getting the hang of it!

What are the laws for flying quadcopters in the US? 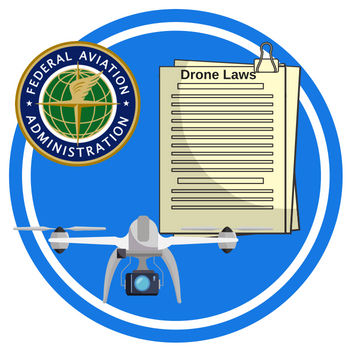 Each state has its own laws for flying quadcopters, so we can’t speak to every situation in this article (we have other articles that lay out in detail the regulations for most major metropolitan areas, so we recommend you seek those out.)

In most cases, you will need to register your drone with the FAA, and you will DEFINITELY have to do so if you’re flying for any commercial purposes. Once your drone’s registered, it cannot be flown over crowds, at night, or out of sight of the pilot.

There are also certain height and distance limits for how far/high a drone can legally fly, but commercial drones take these into consideration and it’s usually not possible to fly them out of legal limits without swapping out some parts. And doing so would be illegal, so don’t do it!

What are the laws for flying quadcopters in the UK?

What flying quadcopters are best for starting with?

For starting with, we usually recommend something like the Altair Aerial AA108. This little drone meets all the requirements of a beginner flying quadcopter – it’s cheap, it’s very durable, and it has lots of ease-of-use features. For example: it can hold its own altitude in the air, so you don’t have to worry about constantly pushing it up or down to maintain position. It also has multiple speed modes you so can start slow and work your way up.

Besides Altair Aerial, Holy Stone and JJRC are two other companies that are known for making solid beginner drones.

We sincerely hope that this guide has helped you learn a little more about some basic rules for flying quadcopters. Remember: be kind, be safe, and respect the privacy of others. Most of these rules are pretty common sense, so they should be easy to keep in mind. 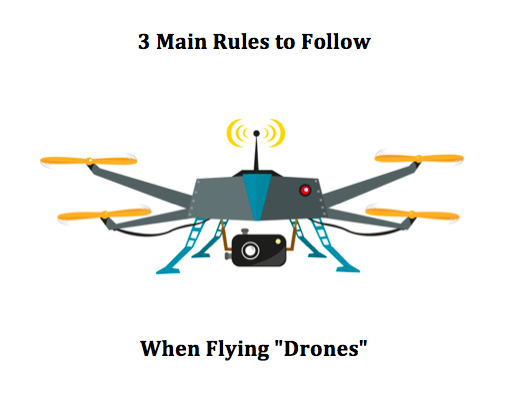