You may have recently discovered that Amazon is one of the first major retailers to take the plunge into drone deliveries. This means that some of your Amazon orders may actually arrive via a drone to your front porch. Customers enjoy the incredible speed and quick gratification of ordering a product that may be delivered much quicker than any mail service could provide. The idea has been so popular that the retail giant Walmart is also looking into ways that they can join in the fun by offering drone delivery.

Amazon continues to develop their drone strategy and just last summer actually had a large, flying drone hub design approved. This hub will act as a base for drones to fly in and out of in order to speed up delivery processes. As anyone can imagine, this will be a rather large unit flying in the sky and the thought of anything happening to something that large that may ultimately cause it to fall is quite terrifying.

Since Amazon is thinking ahead, they are working on the technology that would allow the floating hub to self-destruct in the case of an emergency. This would mean that the hub would break strategically into smaller pieces that would cause less property damage and would also decrease the likeliness of injuring someone on the ground. This new feature would allow an onboard computing system to analyze the best course of action in case of an emergency.

With the patent submitted for this new advancement, they have depicted how the drone would effectively target areas on the ground that would be the safest places for falling pieces to land. In their drawing, they show how this technology could allow smaller pieces to aim for vacant property, trees, and even small bodies of water. This would drastically reduce the chances of people on the ground getting hurt in the case of an emergency. 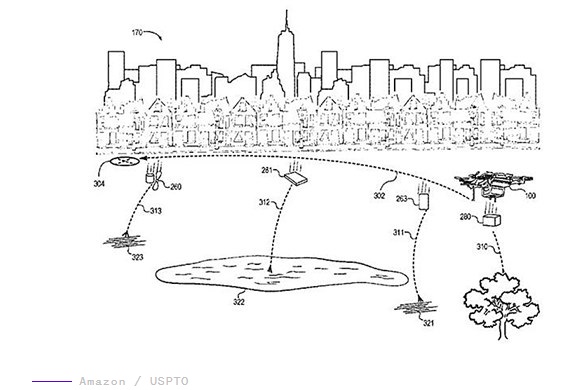 Though Amazon Prime Air hasn’t quite hit the US, there are trial runs being ran with it in the UK. Many other large retailers are getting on board with this plan as amazing technological advances continue to surf with them. For example, drones may soon be used to recharge electric vehicles. They would be able to fly up and charge the electric cars, which would be the world’s first commercial roving fuel systems.

Large companies like Facebook are also joining in on the drove bandwagon. Their aim is to hover over more remote areas and be able to provide wireless signal to those that wouldn’t typically have it. This will allow more people access to the Internet than ever before since the drones will be able to access areas where service was otherwise never considered.

With all of the drone advancements in just 2017 alone, it won’t be long until we can expect them hovering near by. With the new year, we will continue to see amazing enhancements to drones that were never imagined before. The more that these drones are used, the more fuel it provides to companies to use them creatively for various tasks that were never thought of in the past.