We’ve seen all of the amazing advancements that drones have made in both deliveries and security, but now we’re beginning to see that there is no limit to the services that they can provide. Amazon is using drones for delivery while other companies are considering them and emergency services are using drones for a variety of reasons. The rise of drones is proving to make life easier in a variety of situations.

Drones have recently been used in situations of natural tragedies. They have been used to access areas by air that were not accessible by ground. They are able to find people that need help in these situations and allow authorities to bring new means to bring them home. When there are gas and power lines down after a tragedy, these drones are also able to determine exactly where the repairs are needed. This has helped reduce the amount of time that people are without important services and also rescue them in situations that would have been impossible.

In addition to drones being used in emergencies, they are also being used by many law enforcement divisions. They are perfect for allowing surveillance of dangerous areas without risking human life. They are also being used to keep tabs on suspected illegal activity and even to record data that can be used in court. The drones have provided an eye in the sky with video that is great for use in stopping illegal activity. 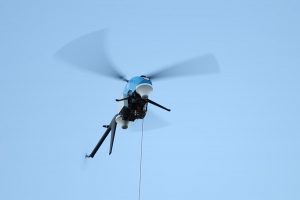 Other countries, such as France, are even using drones as an everyday part of preventing dangerous drivers from being kept on the road. Drones are atop major highways and signal police that are on the ground to step in and issue tickets where necessary. This has ultimately reduced the amount of unsafe drivers that they have on the road.

The new AT&T COW drone is taking on a whole new job for drones. They are being used in the wake of Hurricane Maria in Puerto Rico, which has left many Puerto Ricans without power and cell signal. This drone is able to help natives keep in touch with their families.

COW or a Flying Cell Cell On Wings is currently being flown about 200 feet in the air and each one travels and provides for 40 square miles. These AT&T COW drones are being used to provide LTE coverage to Puerto Rico residents that wouldn’t have cell reception without them. This is assisting the residents in making contact with family to assure they are safe. 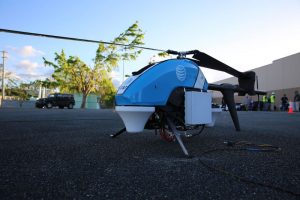 Each COW works by carrying a small cell and antennas. The tether that is connecting the drone with the ground gives users a highly secure data connection and gives the COW an unlimited amount of flying time. The satellite attached to the COW is able to transfer data, text, and calls seamlessly. The COW has the ability to function in remote areas where wireless, or even wired infrastructure isn’t immediately available.

AT&T received an emergency Certificate of Authorization, which has allowed the drone, which is a Pulse Vapor 55, to still operate though it exceeds the FAA’s weight limit. As the permanent infrastructure is being rebuilt, these drones will provide cellular service to the residents. These COW drones by AT&T have crossed a new threshold when providing emergency services to those affected by a tragedy.