Black Swift Technologies, also known as BST, for short, are a specialized engineering firm who have recently been recognized for their recent initiative work where building scientific aerial platforms with a purpose are concerned.

Just a few days ago, they announced that they have been awarded a contract with NASA for the purpose of developing a drone that will be able to perform observations in the upper atmosphere of the planet Venus.

Black Swift Technologies are in the midst of proposing and further creating a planetary drone based off of a proven method for extracting energy from atmospheric shears, which is known as dynamic soaring. This method has propelled the world’s smallest, fastest aircraft while providing the necessary energy needed for low-level, long-endurance flights. Think of birds flying across the ocean at great length, for example.

“While there have been a variety of systems that have been proposed for upper atmospheric observations of the planet Venus, the planet’s high wind speeds post a significant challenge to the designs we have. Our solution is designed to not just survive the planet’s harsh environment thanks to the wind, but also to be simultaneously able to perform targeted sampling of the atmosphere will still being able to extract the energy we need, even if it’s on the darker side of the planet.”, the CEO of Black Swift Technologies, Jack Elston, Ph.D., commented.

Though Venus has the hottest surface temperature of any planet in our Solar System, coming in at a whopping 467-degrees C, the temperature and the atmospheric pressure from 50 km to 65 km above the surface of Venus is almost identical to Earth’s. Because of this, for decades the upper atmosphere of the planet Venus has been an exploration focus. 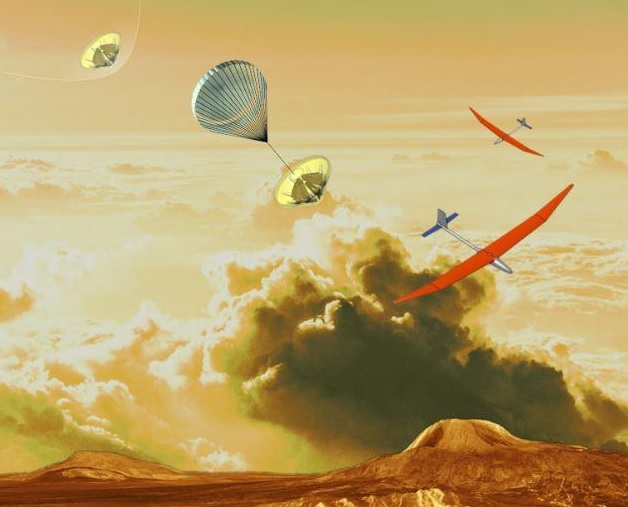 “Black Swift Technologies has provided aerial solutions for wildland fires, volcanic observations, tornadoes, and hurricanes – some of the most extreme phenomena on Earth. This mission is a natural extension of our focus, only now are we concentrating on the extreme conditions of Venus.”, comments Elston.

Black Swift Technologies were founded during 2011 in Boulder, CO. They are recognized for their ability to deliver robust, reliable and insanely accurate unmanned aerial systems, all of which are capable of flying in demanding atmospheric environments with scientific payloads. In fact, their drones are capable of flying at high altitudes, in corrosive particulates, and even during the strongest turbulence imaginable.

Venus has an atmosphere that is primarily composed of nitrogen and carbon dioxide, which means it’s a lot hotter and denser than that of our Earth. Because of this, Black Swift Technologies have been contracted as a result of NASA’s need for the best of the best.

Each of their UAS solutions use the SwiftCore Flight Management System, or FMS, which consists of the SwiftPilot autopilot system, the application-specific sensor integrations, the SwiftStation ground station, and the SwiftTab user interface, which is a tablet-based technology.

In addition, Black Swift Technologies also use a number of their unique capabilities in order to fully develop and further deploy their advanced small UAS. This is all thanks to their team’s expertise combined into their designs, implementations, and overall analysis when it comes to “smart” controlled systems, their expertise when it comes to both safe and legal flight operations within the airspace of the United States, and even their practical knowledge and experience in regard to their flight experience within demanding conditions.

We’re excited to see what Black Swift Technologies comes up with in the near or distant future, especially when it comes to how they will utilize UAS technology and soar to new heights, bringing our Solar System just a little bit closer.