Drones are being used more often each and every day for a variety of tasks. From parcel deliveries, food deliveries, and even security services, their abilities advance with each new model that hits the market. In France, you can even get a speeding ticket with the aid of a drone that monitors busy highways. 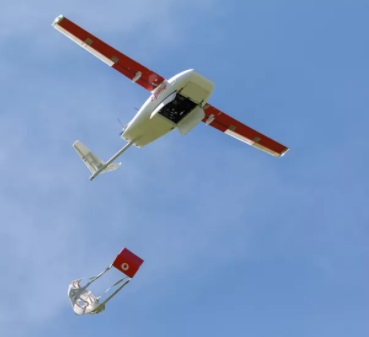 Zipline, a drone company that runs a commercial blood delivery service in Rwanda, has just revealed a new model. This new aircraft will have the ability to make up to 500 deliveries in a single day. Zipline has completely redesigned their entire system, including their distribution centers in an effort to maximize their delivery service.

The new drone weighs approximately 44 pounds and can carry about 4 pounds of cargo. It comes equipped with multiple motors so that in the instance that one was to stop working, the aircraft would still be able to fly. Reaching speeds of up to 80 mph, it has the ability to make a round trip of up to 100 miles. To get an idea of the size of the vessel, it would take up about two parking spaces.

Blood that is delivered will be packaged within small boxes that are attached to paper parachutes. The new system and drone implementation is part of Zipline’s plan to scale and begin offering their services around the globe. The company has currently applied to take part in a trial that is organized by the UAS Integration Pilot Program, which is a partnership between local governments and the commercial sector. They’ll know if their project is chosen on May 7.

As of 2017, Zipline has already announced their intent to expand services to cover Tanzania. If their project is approved, the company will be able to grow much faster and offer services to more countries, including the US.