We have posted some great videos before about the work of Raffaello D’Andrea and his team at ETH Zürich. This time, they came with a high tech way to celebrate Christmas. But before we look at the great video, let’s look at Rafaello’s  – or as he is usually called: Raff’s – road to where he is today. Trust me, it’s worth reading, Raff had a very interesting life!

Spanning academics, business and the arts, Raffaello D’Andrea’s career is built on his ability to bridge theory and practice: He is Professor of Dynamic Systems and Control at the Swiss Federal Institute of Technology (ETH) in Zurich, where his research redefines what autonomous systems are capable of. He is also co-founder of Kiva Systems (recently acquired by Amazon), a robotics and logistics company that develops and deploys intelligent automated warehouse systems. In addition, he is an internationally-exhibited new media artist, best known for the Robotic Chair (Ars Electronica, ARCO, London Art Fair, National Gallery of Canada) and Flight Assembled Architecture (FRAC Centre, France). Here is an interesting video of the robotic chair.

For two years now, there’s been a reason to be on your guard at ETH during the festive period: robots are on the loose! They go on the rampage at ETH Zurich and the surrounding area, knocking over Christmas trees, dragging presents around campus and throwing them here and there – always autonomously and seemingly free of human control.

This year, however, they are behaving themselves. No tree felling, no fighting over gifts. Instead, the robots just want to entertain people by dancing and performing a variation on Jingle Bells.

Ok, enough of teasing, here is the video, but please promise to read on afterwards!

In retrospect, Raff considers himself lucky to have made it to adulthood. As a child he was fascinated by science and the physical world, and had a penchant for putting himself into his own scientific experiments. He learned about water pressure by jumping into a swimming pool with bricks attached to his legs and a garden hose attached to his mouth; knowledge of aerodynamic stability – or lack thereof – was gained by jumping from a rooftop with a lawn umbrella; he created hydrogen gas by electrolysis, and in the process flooded his basement with chlorine gas; the laws of inductance and Faraday’s law were painfully learned through the use of batteries, transformers, and his mouth as a poor-man’s voltmeter; innumerable experiments with fireworks, flammable liquids, gunpowder, and live ammunition resulted in several unplanned haircuts, and an appreciation for the incredible amount of energy stored in chemical bonds.

Raff combined his love for science with his need to create by studying Engineering Science at the University of Toronto, where he received the Wilson Medal as the top graduating student in 1991. Then, after cycling from Vancouver to Toronto on a mountain bike, he moved west to begin graduate studies in the area of Systems and Control at the California Institute of Technology (Caltech), where he worked on two separate projects: very theoretical research on the optimal design of systems, and very applied research on the use of pulsed air injection to eliminate instabilities in jet engines. After receiving his PhD in 1997, he joined the Cornell faculty as an assistant professor, where he was a founding member of the Systems Engineering program, and where he established robot soccer – a competition featuring fully autonomous robots – as the flagship, multidisciplinary team project. In addition to pioneering the use of semi definite programming for the design of distributed control systems, he went on to lead the Cornell Robot Soccer Team to four world championships at international RoboCup competitions in Sweden, Australia, Italy, and Japan.

While on leave from Cornell, from 2003 to 2007, he co-founded Kiva Systems, where he led the systems architecture, robot design, robot navigation and coordination, and control algorithms efforts. Kiva has deployed installations worldwide, including a 1,000+ mobile robot system in the United States. By the time Amazon acquired Kiva in May 2012 for 775M dollars, it was a 300-person company with a long customer list that included Walgreens, Staples, and Saks, with more than 30 warehouses deployed across Europe and North America.

Throughout his academic and business career, Raff has collaborated with artists, architects, and engineers to create dynamic sculptures. He has exhibited his work at various international venues, including the Venice Biennale, Ars Electronica, the Smithsonian, and the Spoleto Festival. In addition, his work is in the permanent collections of the National Gallery of Canada (Robotic Chair, Table), the FRAC Centre in France (Flight Assembled Architecture), and the Heinz Nixdorf Museum in Germany (Blind Juggler).

After being appointed professor at ETH Zurich in 2007, Raff established a research program that combined his broad interests and cemented his hands-on teaching style. His team engages in cutting edge research by designing and building creative experimental platforms that allow them to explore the fundamental principles of robotics, control, and automation. His creations include the Flying Machine Arena, where flying robots perform aerial acrobatics, juggle balls, balance poles, and cooperate to build structures; the Distributed Flight Array, a flying platform consisting of multiple autonomous single propeller vehicles that are able to drive, dock with their peers, and fly in a coordinated fashion; The Balancing Cube, a dynamic sculpture that can balance on any of its edges or corners; Blind Juggling Machines that can juggle balls without seeing them, and without catching them. In addition, he is collaborating with scientists, engineers, and wingsuit pilots to create an actively controlled suit that will allow humans to take off and land at will, to gain altitude, even to perch, while preserving the intimacy of wingsuit flight. Playful and creative, each of these projects support his team’s natural instincts to be curious, explore and discover. And yet they also serve as real experimental platforms for developing new practical technologies.

Kudos to Raff and his team and Merry Robotic Christmass To You All! 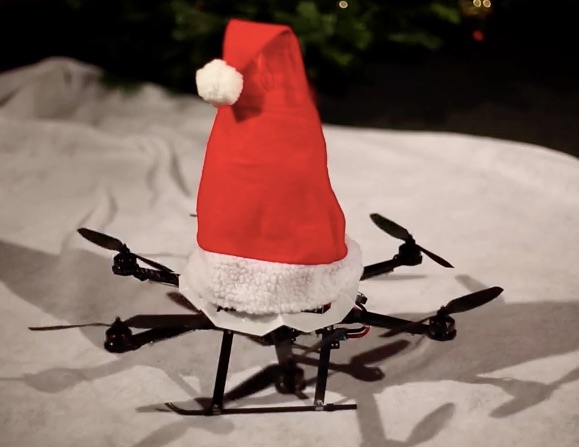