An aerial drone testing program got off to a bumpy start Friday in Nevada, when the first unmanned aircraft authorized to fly without direct Federal Aviation Administration supervision crashed during a ceremony at a remote site.

“This is still a great day for Nevada,” Gov. Brian Sandoval said after the orange aircraft dubbed the Sensurion Magpie was launched by hand, flew about 10 feet and plunged nose-first to the desert floor.

“This is testing,” the governor said. “This is why we’re here.”

Company and FAA officials said the drone wasn’t damaged. But they didn’t try to fly it again during the ceremony.

“Protocol is to troubleshoot the problem,” said Bruce Tarbert, an official with the Nevada Institute for Autonomous Systems ? the testing agency that became the first in the nation to gain FAA approval to issue airworthiness certificates on its own.

Certification was made official earlier, Tarbert and FAA officials said, when the pilotless airplane weighing less than 8 pounds and a wingspan of about 5 feet flew for about 15 minutes before guests arrived.

“Today marks the first time that a special airworthiness certificate has been issued to any UAS applicant at any UAS test site,” Martin said, and the first time an FAA-designated representative was authorized to issue the document.

Sensurion Aerospace CEO Joe Burns told the 40 people who attended that they were witnessing the birth of a new industry involving unmanned aerial vehicle research, development and operations.

The use of drones is expected to grow quickly not only as a way to deliver pizza or packages by air, but to spray crops, inspect power lines, collect seismic data and provide an eye in the sky to news crews and police.

Steven Hill, the governor’s economic development chief, noted the timing and location of the ceremony held on a sunny and clear morning in a vast expanse of desert about 30 miles east of downtown Las Vegas.

“We have 320 flying days a year,” Hill said. “We are probably one of the few locations in the country that has the ability to confidently schedule a flight on Dec. 19.”

Nevada was one of six states chosen a year ago as a test site for drones while the FAA develops operating regulations.

The first FAA-authorized commercial drone operation over land began in June in Alaska.

Sandoval compared the fledgling drone industry in Nevada to the cellphone industry 25 years ago, and said he hoped Nevada would become a hub for drone development “so our kids and grandkids can stay here and have a career manufacturing and flying UAV’s.”

Nevada, with vast expanses of open and undeveloped land, already has a top U.S. drone surveillance and combat operations center at Creech Air Force Base about 35 miles northwest of Las Vegas. It is also home to an air combat training center at Nellis Air Force Base.

Hill said the state has three other official drone testing facilities at airports in Mercury, Fallon and Stead, near Reno. 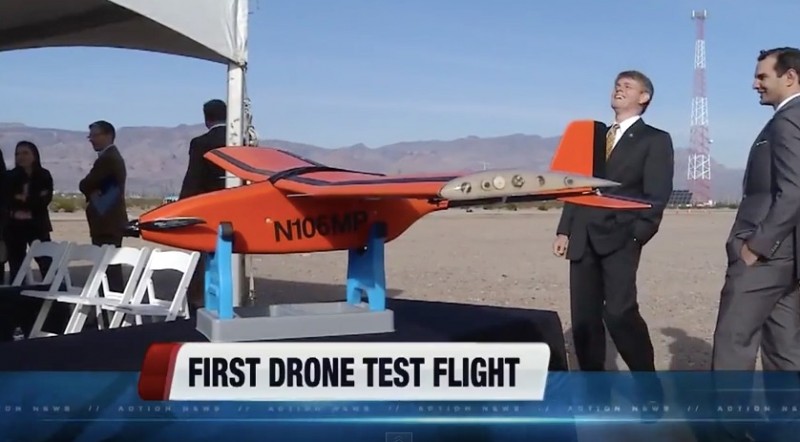 Article Name
First Drone Crashed in Nevada Test Program's Demo
Description
An aerial drone testing program got off to a bumpy start Friday in Nevada, when the first unmanned aircraft authorized to fly without direct Federal Aviation Administration supervision crashed during a ceremony at a remote site.
Author
Zsolt Vaszary