The Drone Racing League 2017 season kicked off this last weekend on ESPN and ESPN 2. Drone racing is a new sport airing its second season on ESPN over the next two weeks. Participants use “Quads” or drones, which are remote control helicopters with four rotors each. They pilot them remotely using First Person View (FPV) goggles through gates or checkpoints on a race track at speeds up to 120 MPH. It’s a light speed paced 3-dimential formula one, or the Starfox 64 racing game they never made.

The Drone Racing League is the biggest and most prestigious tournament for drone racing in the world. The focus for this league is all on the pilots. 12 men from five different countries use identical drones, so there is no advantage in a better engine or more refined tuning. They will be competing in 4 custom made tracks around the United States to see who can get the most points and be crowned the DRL champion of 2017 Miami Nights, the first of the four courses, finished up on June 24th with Switzerland-born Gab707 (real name Gabriel Kocher) 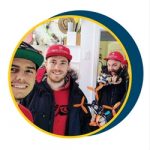 taking down top position. Gab got to an early lead on points winning several of the opening races with a very stable and consistent racing style. Never showing nerves or taking to many risks he outlasted the riskier pilots early on and was able to hold off late charges by the more daring opponents to secure his number one spot. Notable not on the podium was Jet, the 2016 world champion. His blend of risk-taking and solid mechanics didn’t serve him well for the first day, and he fell so far behind that even with brilliant racing and the second best single lap recorded he couldn’t work his way back to the leader board.

Atlanta Aftermath starts this week. They will be racing in a renovated emergency response and disaster training center, featuring many sharp turns and narrow straightaways where the more technically sound pilots should shine. With Gab’s steady and smooth style he is expected to dominate again, but the more aggressive newcomers like 32Bitsofgil the first rookie to get to the finals stage this year, and former champion Jet will be doing their best to re-take the lead.

It will be airing at the following times:

With a re-broadcast at:

What are all the pilots wearing on their face?
Each pilot has their own First Person View goggles so they can navigate from the point of view of their drone. They each have their own digital link to the drones, so it appears like their sitting in the cockpit of a real plane.

How fast do the drones fly?
The top speed of a racing drone is around 120 MPH, but in the Drone Racing League with the closed course and many sharp turns, it will be much more about control and strategy than reaching the top speed possible.

How are the races scored differently from Nascar race?
The pilots will fly several heats or laps around a course, getting points for passing through each gate or checkpoint, and additional points for finishing the heat within a time limit.

Why watch drone racing?
Speed. Drone Racing League is like the shootout at the end of a hockey game. There are no moments that don’t matter in the race. Every second counts in their minute long races, with multiple lead changes and crashes happening every heat.