As we get deeper into 2018, we continue to see more of the amazing tasks that drones are able to accomplish. With each new model that is released, the camera quality and flight capabilities are typically better than the previous one. Motors become more powerful and battery life also increases, which allows the drone to fly further for longer amounts of time. All of these updates combined give UAV pilots the ability to capture incredible videos and photos that were never thought to be possible.

This video was captured in Barcelona off the coast of Catalan in the Mediterranean Sea. The area between Catalan and the Balearic Islands is actually a popular feeding ground for the Fin whales and sightings of them are frequent during the spring. Many sightings are recorded and documented each year.

The Fin whale is the second largest mammal and follows closely behind the Blue Whale. Measuring at lengths over 79 feet, these whales are also considered to be an endangered specie. There are only an estimated 50,000 to 90,000 of them in the world. 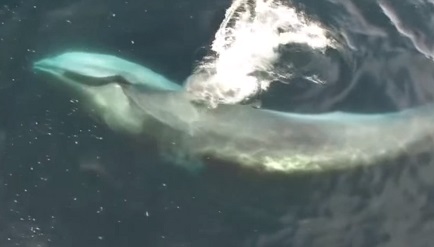 This footage provides valuable information to marine biologists like those in the Fin Whale Project, who have been studying them off of the coast of Catalan since 2013. They will be able to see some of their eating habits, their size, and also some of their common behaviours just by viewing the footage and pictures that have been taken by the drone. By using drones, they are able to monitor the whales without disturbing them at all.

In the video, the whales are seen feeding on the surface. They come up with their mouths open and their bodies expanded and then as they close their mouths and sink back down into the water, their body returns back to its normal size. After filming the video, the drone was also able to capture images of a pod of 10 whales feeding together.