The FAA’s Low Altitude Authorization and Notification Capability (LAANC) program has begun their beta testing phase, currently being implemented incrementally across the United States of America.

Since November of last year, 2017, a prototype of the system has been placed in 44 airports. The majority of these prototypes can be found at the Minneapolis ARTCC.

The Beneficial Process of LAANC 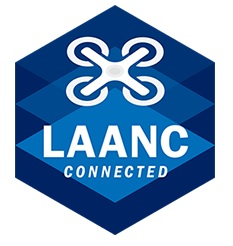 The LAANC is the result of a collaboration between the FAA and the Industry with the purpose of supporting UAS integration into the airspace.

The LAANC has an inspiring aim of implementing drone operations while all other aircraft within the national airspace system remain as safe as possible.

Each provider working with the LAANC are giving the FAA a helping hand in making the process of airspace authorization go a lot faster and become more accessible for operators of commercial drone users. The traditional waiver process typically took up to 90 days.

Now, however, the operators can get the authorization they need within seconds to fly within controlled airspace and up to predetermined altitudes, a major step in the right direction.

Authorization for complex flights, such as those that require coordination from air traffic control or those at higher altitudes, closer to any airport, etc., requesting manual authorization and receiving confirmation has also been sped up. Before, it used to take an average of at least 30 days to receive the confirmation needed, but now it can take as little as 1 minute.

The necessary authorizations made are based on Notams, TFRs and UAS facility maps. Each map shows the maximum altitude ceilings around specific airports to ensure that the FAA are able to authorize all UAS operations under Part 107.

The first wave of the project is already well underway. 150 airport metropolitan and geographic areas are opening themselves up to the program, as well as an additional 500 at time goes by and the program begins to show pure success.

In the end, everything will cover approximately 300 air traffic control facilities and 500 airports after the initial testing phase, which is currently taking place in the country’s south-central region, is completed late this September.

Here is a quick summary of the waves: 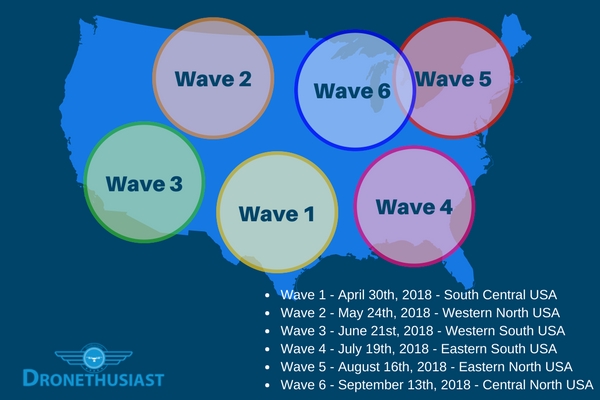 The authorization process for the operators of the drones, streamlined by LAANC, is all about using controlled airspace. The operators endured a process of long applications for a couple of months.

Applying and receiving authorization has come a long way since the initial process that took a long time to send out and receive. Now, all the operators need to do is apply and receive authorization within the areas where deployed systems are located almost immediately.

Because LAANC streamlines the authorization process, and because communication must be done quickly, applications are used to ensure that everything is smooth sailing.

Smartphones and apps, in general, simplify our daily lives, which is why LAANC incorporated them. The digital airspace authorization offers specific services related to the project in the form of applications, such as 3DR, Converge, Kittyhawk, DroneDeploy, Betterview, and AirMap.

AirMap, an app that is both backed and started by the ever so famous DJI drone manufacturer, is one of the major FAA-approved apps that gives the operators of the drones instant approval when it comes to flying in airspace controlled by the U.S. Before these apps existed, there would be a 3-month waiting period to receive FAA authorization to fly.

Luckily, when the AirMap platform is used, drone operators will not have to face any additional costs or fees over needed authorization.

The Future of the LAANC Program

At this time of writing, we should expect to see a lot more FAA facilities offering the LAANC authorization program within the next few months of 2018. The program is aiming to make a larger nationwide initiative that makes authorization easily accessible for everyone.

As a quick note for areas who don’t have LAANC available, drone users can still go through the authorization process the old-fashioned, manual process of applying for authorization. You can also wait until the LAANC becomes available in your area, or even travel to one of the areas that has the coverage.