Imagine a revolving advertisement that floats above the heads of concert-goers, displaying your product in brilliant color. The subtle hum of the video drone inside of a spherical cage displays advertising in a format that no one has ever seen before in a format that looks like something out of a science fiction movie. Skipping across the baseball field, floating subtly above the heads of the fans or humming across the park, the NTT Docomo brings fantasy to a neon flashing reality with the world’s first spherical drone display. 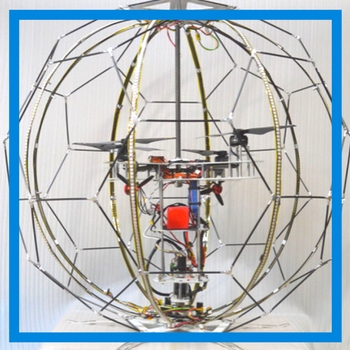 At just 88 centimeters in diameter and weighing in at 3.4 kilograms, the NTT Docomo spherical drone is housed in a LED spherical display frame that features eight strips that curve from the top of the drone to the bottom. Visible from all sides, this true 360-degree display provides a 144 x 136 pixel screen that rotates at a very high speed, sharing the full-color video from all angles. The open cage frame allows for the intake of air, providing cooling for the drone as it hovers over virtually any surface. Unmanned and controlled in the same way as a standard drone, NTT Docomo’s spherical drone is designed to get your message across in a completely new way.

The quadcopter inside of the spherical display frame is held stable with legs that protrude from the lower portion of the frame in order to make launching the spherical drone a breeze. The eight vertical strips on the outside of the drone’s frame rotate at a high speed and flashing LED lights provide the brilliant color display that measures in at 144 x 136 pixels. Speeding across the top of any gathering of people, the spherical drone can be programmed to provide information for an event, advertising for the supporting companies, or even a fun display that is incorporated right into the event.

Although the spherical drone’s after-image appears solid, the speeding turns of the exterior frame offer enough cooling to allow for proper functioning of the quadcopter housed in the frame. This drone is piloted in exactly the same way as a standard quadcopter with a remote control system and video gathering capabilities if desired. Replacing those old-time banners pulled by planes, a sky filled with spherical spinning advertisements might be the future of advertising technology. The NTT Docomo’s spherical drone was showcased at the Niconico Chokaigi Conference, the festival that displays the best of Japan’s internet culture. Not available for sale at this time, the spherical drone is small, light, and extremely maneuverable, making it a perfect addition to outdoor marketing and advertising regardless of the terrain.

Before you replace your advertising budget with a huge order of NTT Docomo’s spherical drones, take a breath. These spinning whirlwinds of technology are not available for commercial use. Battling balancing the weight and lack of airflow in its original designs that greatly hindered the flying ability of the internal quadcopter, NTT Docomo seems to have struck a balance. The mostly hollow frame provides plenty of airflow and does not disrupt the quadcopter’s propellers, while the rapidly spinning display frame shares a brilliant 360 degree display that can be viewed clearly from any angle as it bobs above the heads of concert-goers or sports event attendees. With these updates in the technology, the NTT Docomo spherical drone is definitely on the right path to thrill drone enthusiasts with a message and advertisers who want a new way to set their product on center stage.

Put together with its brothers, the video drones, the NTT Docomo spherical drone could be the future of advertising in cities, at concerts, and even at sports events. Someone expresses interest in your new product, and you can send a drone right to their door to display the product’s features. Disney’s major theme parks have expressed interest in placing this type of video drone into shows and parks for displaying information regarding theme park happenings and as actual portions of the shows themselves. The brilliant color and extremely maneuverability of the drone gives it the potential of becoming an amazing addition to concert halls, shows, and those sporting events where advertisers are now limited to billboard-style displays that quickly bore the audience. NTT Docomo’s continued advancements in drone technology definitely delights drone enthusiasts and techno-buffs alike.