Automating drone usage has long been a problem for enterprise adoption. In many cases, use cases that are appealing to companies are locked behind costs that aren’t always justified. FlytBase, a California startup, is looking to change that bring professional drone automation to a larger audience of enterprise customers. They are working on a variety of automation techniques for prosumer drones to make them more versatile and appealing to enterprise users.

One of the key places FlytBase is focused on is autonomous landing. That is the ability for a drone to pilot and land itself, whether that be for charging purposes or another area of interest. That also includes situations that aren’t lading but hovering, autonomous technology is of use here as well.

Autonomous landing has been available for commercial grade drones, but FlytBase is looking to bring the functionality to a variety of prosumer drones (DJI Mavic and Phantom Series). Their intelligent landing system uses a downward facing camera along with computer vision algorithms. This allows them to land without the need for external sensors or cameras.

The functionality also comes integrated with the cloud, allowing customizations on the fly. FlytDock also allows landing in non-standard conditions such as at night or low light. These features together make it well suited for commercial and enterprise drone fleets.

They also want to allow full drone in a box solutions at a price point that makes use viable. These drones would be used for long range or long endurance missions. This means that drones need to be able to take off, hover, and land intelligently, all with the ability to react to unforeseen issues. This also includes the ability to automatically charge, which would allow a drone to undertake multiple flights independently. 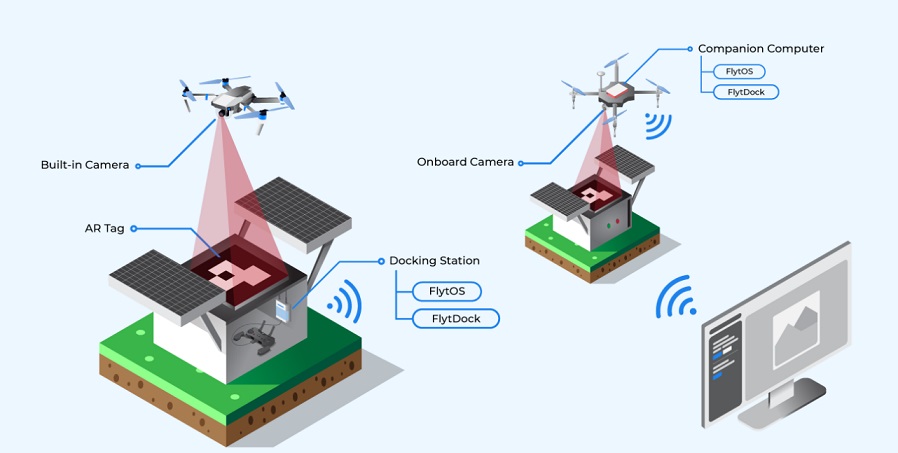 Another point for FlytBase is development on indoor flying conditions that may be cut off from GPS. This also comes with integrations with their cloud configuration and control. These types of drones also require many of the features that outdoor drones need in terms of automation. Integrating these features can help drive large scale, indoor drone usage.

FlytBase continues to work on providing commerical quality features to prosumer drones. This mix of features with the lower price point of the drone works in favor of enterprise adoption. With continued efforts, enterprise adoption of autonomous drones might be just around the corner.