A few weeks ago we wrote about the Drone Racing League and its first-ever event pitting human pilots against autonomous drones in an obstacle race. This was their first racing event where teams of developers would pit their best flying drones against top human pilots to see which were the best flyers. Over 430 teams tried out, but only nine qualified for the event and a chance at the grant price of over $1m dollars offered by Lockheed Martin. At the end of the day, humans still prevailed, at least for the time being. 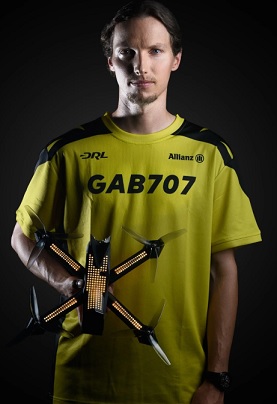 Gabriel Kocher, known in the Drone Racing League as Gab707, was the lucky man setup to race the drones. The race took place through a pair of goggles that gave him a first-person view from the drone to pilot through the course. At the end of the day, he managed to pilot his drone at speeds over 70mph and was able to finish the course in only 6 seconds, proving victorious.

His opponent was an AI-powered drone developed by Delft University of Technology’s MavLab. This drone was specially programmed to match the blistering speeds needed to compete while watching out for and avoiding obstacles. One of the key points of the race was that the course was a surprise, so the drone needed to be able to calculate obstacles in realtime and not rely on any pre-programmed routes. This made the task that much more difficult.

While the AI drone did well, it fell behind finishing the course in 11 seconds. While that’s still fast, it’s definitely a big difference from the human pilot. That’s not due to lack of speed though, the drone was able to approach similar speeds to the human competitor, but was simply not able to react as quickly to the environment. In qualifying rounds crashes were common, and many drones were only able to fly for a few seconds at such speeds before faltering.

The event, however, did do a great job of showcasing the future of AI drone racing and get people excited about its future. Drones have the potential to be able to react significantly quicker than humans, and once the technology reaches that level it won’t be long before they’re out racing us.

This isn’t an easy problem though as the drones AI can easily be confused by simple visuals that wouldn’t have any effect on a human racer. For example, the team had to take into account the checkered pattern signaling the finish line or risk the drone being confused by it. These subtle changes in the environment can make a big difference, and help illustrate just how difficult writing these types of AI programs is.

Despite the loss, the MavLab has a lot to celebrate. Not only did they beat out over 400 racing teams, but they did put up a good fight. This is the first event after all, and they put up fierce competition. It will be exciting to watch future events and see how much better the AI can improve. MavLab is continuing to develop its technology and is working on a wide variety of drone-related projects. MavLab is confident they’ll be able to win on simpler courses in the next few years.

In fact, many experts estimate that as soon as 2023 we might see drones victorious. That’s a bold estimate, but with the way the drones performed at this event it certainly has some credence to it. Who knows what will happen in the next few years. We’ll just have to wait and see, and I for one couldn’t be more excited to see what happens next.