Nothing is worse than your drone running out of battery; having to stop flying and replace it can really kill the fun. In other industries, like search and rescue, the consequences of downtime can be even more drastic. Luckily, researchers at UC Berkeley have been working on a solution to get rid of this annoying problem. If you’ve ever heard of planes refueling mid flight then you’ve got the concept of what’s going on here. The researchers have managed to create drones that are able to swap out batteries mid flight to drastically increase flight time.

Battery life has long been a concern for drones, especially those looking to complete complex businesses needs. The more weight a drone takes on, the less flight time it has, but to be useful drones typically need sensors and cameras. It’s sort of a catch-22 situation where no matter what you do the usefulness of the drone decreases, whether that be through a shortened flight time or less sensory equipment. With the ability to recharge mid flight, many of these limitations disappear as even a short flight time can be mitigated with in-flight recharging.

The charging works by having smaller drones bring batteries to the target drone. These smaller drones only need enough power to get to and from the main drone, so they use very little and can be quite light and small. The battery drones approach the main drone, and take position roughly 30 centimeters above. Once they line up, they slowly descend until contact is met. 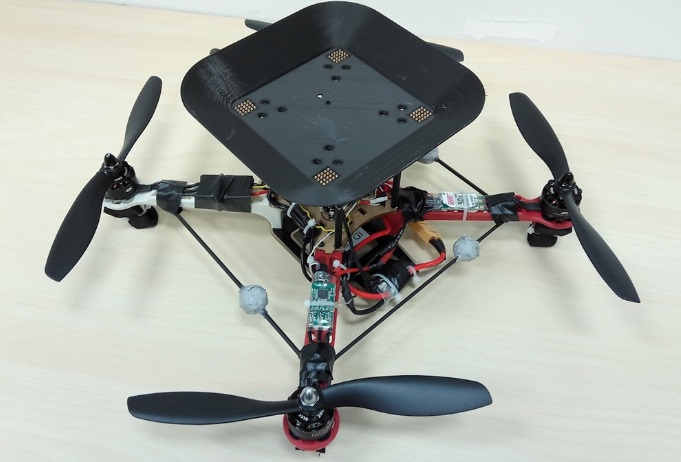 Once that happens, the smaller drone can completely power the main drone. They provide about 5 minutes worth of battery life each, at which point they fly off and a new one takes its place. With multiple swaps, they were able to extend the flight time of their drone from 12 minutes to over an hour. A stunning improvement and progress that real bodes well for future uses.

This has a lot of practical uses, even more so when you think beyond personal or hobby use. We recently wrote about delivery drones, and having the ability to cover larger distances with drones is a huge win for their adoption. They would also be very welcome for things like search and rescue where every second counts. There’s certainly more uses, but this is just a couple to put in perspective the types of industries that would be affected by new technology like this.

All of this currently happens in a motion controlled environment that makes the whole process easily controlled. Researchers have yet to get it to work in a less controlled environment or with a moving drone, but it’s something they are actively working on. There’s still some work to do before this is a publicly or commercially viable solution, but the progress is encouraging.

Another problem before this system has commercial use is the need for the recharging drones. For example, a package delivery across a large city might require the recharging drone scattered throughout the city. This might be practical enough here, but military operations for example don’t have the same luxury and generally operate in less controlled environments than a relatively peaceful city.

Overall though, it is a very exciting development, and looks like a solid increase in the usability of drones. Battery life has always been one of the big concerns for adopters of drone technology, so to see work being done here is a big win for that direction. With developments like this, it won’t be long until drone technology is adopted much more for commercial uses, as well as just being better for hobbisysts as well.