Intel Corp. is now officially working with the China Foundation for Cultural Heritage Conservation, or the CFCHC for short, with the purpose of aiding in protecting and preserving the Jiankou section of the Great Wall of China using their Falcon 8+ drone.

The Falcon 8+ conducts aerial surveys and inspections of the Jiankou section with the goal of capturing high-resolution images in the tens of thousands of areas that are far too dangerous to be accessed by humans.

The Jiankou section of the Great Wall of China dates back more than 450 years during the Ming dynasty. Unfortunately, due to human destruction and natural erosion, there are a number of repairs that constantly need to be done. In total, the Jiankou section is 12 miles long. It’s one of the most dangerous, steepest areas that prove to be an issue where repairs made by humans are concerned, which has lead to the need for a better way to not only make the repairs, but assess where they need to be done specifically.

Before Intel Corp. introduced the Falcon 8+ drone, preservation of the Jinkaou section of the Great Wall had not seen any real progress because of the risk factors involved.

On a regular basis, the images that are captured using the Falcon 8+ drone are further processed to be turned into a 3D model. Preservationists are then provided with a digital replica of the real thing, which allows them to go over the current state of the wall at that time.

Before Intel Corp. brought the Falcon 8+ drone into the picture, the surveys were initially done through a long, manual process of using a tape measure or by conducting a visual inspection by humans, a process that would take up to a month at a time. 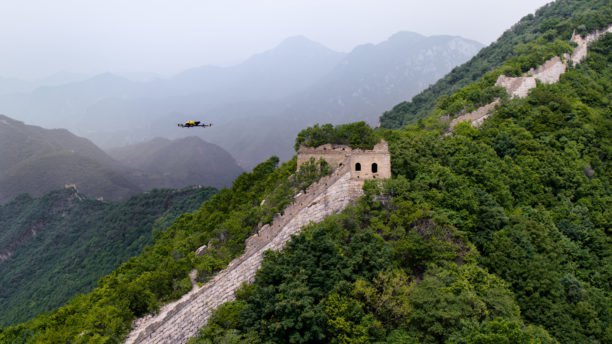 Now, however, the technology provided by Intel has allowed these inspections to be completed safely and in as little as 3 days time. What’s more, the data collected is now more accurate than it initially was, which further helps to develop a repair schedule that is better informed and more effective than ever.

Special teams are now using the drone to analyze the types of repairs that are required, as well as calculating the time, labor, and overall cost of the materials that are needed for the repairs.

Engineers and other experts from the Wuhan University LIESMARS are providing support in implementing new technologies to be used later down the line.

Because the Jiankou section of the Great Wall of China is so dangerous for humans to assess and work on, as well as being one of the most popular areas of the Wall where tourists are concerned, proper repairs and preservation have not been possible for more than hundreds of years.

The partnership of Intel and the engineers, experts, and researchers from the Laboratory of Information Engineering in Surveying, Mapping and Remote Sensing at the Wuhan University ensure that conservationists are going to have new tools to further the protection and preservation of one of the greatest architectural wonders of our world.

Intel Corp. initially became involved with the restoration and preservation of the Great Wall of China through their Tech for Good program. Their involvement with the Wall is just a part of their broad brand campaign, which was initially introduced with their Polar Bear and Snot Bot programs.

Thanks to Intel Corp. and their Falcon 8+ drone, the Great Wall of China will be around for generations to come, remaining the world’s largest, ancient man-made structure.