There’s lots of ways to get people excited about drones. You can talk about the huge benefits they’re already bringing to industries like search and rescue, transportation of medical supplies, package delivery, and land inspection. You can show them some of the brilliant documentary drone filmmaking that’s capturing everything from tornados to drift racing in ways we’ve never seen before.

But usually, my go-to move for convincing someone of the “coolness factor” of quadcopters is to show them how these aircraft are being used in their favorite Hollywood blockbusters. For example, nearly all of the footage taken above the train here:

At the 2019 AUVSI XPONENTIAL trade show, 8500 technologists, regulators, and users across commercial and defense drone industry sectors come together to discuss anything and everything relating to unmanned and autonomous flight systems. While covering the show, our colleagues at Drone DJ spoke to Hollywood drone pilots Stephen Oh, Aidan Kelly, Luke Annells, Jonathan Hong, and others to learn more about the ‘copters and cameras that filmmakers are using on set.

Naturally, professional cinematographers and camerapersons have very different requirements than your average drone videographer (which is not to besmirch the great work being done by the latter category of pilot.) Hollywood directors often have their own requirements based on what they know they want the shot to look like. Unlike most of us drone enthusiasts who are perfectly happy to shoot on digital, many movies are still shot on physical film, which provides a different look with higher resolution and richer colors (before grading.)

Obviously, if you’re carrying a heavier film camera – or worse, a massive IMAX camera – the Mavic 2 isn’t going to be an option. Even heavy lifting drones like the DJI Matrice 600 only has a maximum payload of 5.5 kg (12 pounds). That’s why companies like XM2 Cine (whose representatives include those Drone DJ spoke to) are using massive custom-built drones to carry the payload. XM2 Cine’s biggest drone, the Sierra, uses 8 huge lithium batteries for maximum flight time, weighs 150 pounds on its own, and has a maximum payload of 30 kg (65 pounds).

This powerful drone (which you can actually buy for yourself if you happen to have 100,000 Australian dollars lying around somewhere) was used on Aquaman, Pacific Rim: Uprising, Thor Ragnarok, the fifth Pirates of the Caribbean movie, the HBO TV series Westworld, and – perhaps most excitingly of all – the upcoming Star Wars Episode IX – The Rise Of Skywalker. 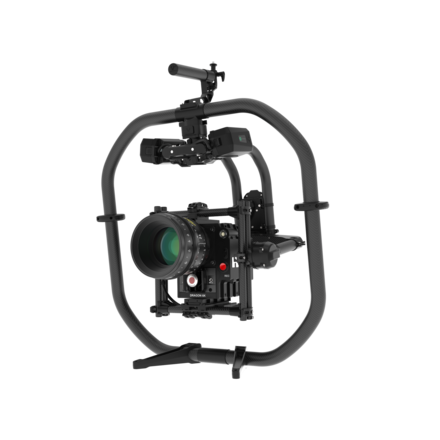 The mighty Sierra drone supports 21 different cameras and can be tweaked to meet specific requirements. But the most common cameras used on Hollywood drone shoots are the Arri 235 (a compact 35 millimeter film camera), the RED Monstro 8K (for high resolution imaging), the Arri Alexa 65 (a 6K digital camera), the Logmar Magellan (a 65 millimeter film camera), and Cine’s own XM2 Stingray (an array of three Alexa Mini cameras.)

If you’re a videography nerd like we are, or a lover of blockbuster cinema, we hope this article has given you a fascinating inside look at the world of Hollywood drone camera usage.