“Essentially,” says Yulun Tian, a graduate student in the Department of Aeronautics and Astronautics, “we’re replacing humans with a fleet of drones to make the ‘search’ part of the search-and-rescue process more efficient.” 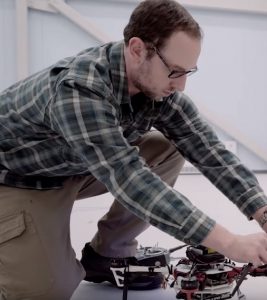 Tian is describing the results of a research paper which he and other students at the Massachusetts Institute of Technology will be presenting this week at the International Symposium on Experimental Robotics. The paper outlines an autonomous system of drones equipped with high-tech scanners which could help find lost hikers wandering through the large forests of the United States.

The idea is to have a fleet of drones flying in a pre-set GPS path over large forests, communicating their position and the results of their scans with a ground station. These scans will be made using LiDAR (Light Detection And Ranging) sensors mounted on the drones themselves. LiDAR is an advanced form of survey technology that has become very popular in drone applications because of its ability to study areas with thick vegetation and scan through heavy tree cover.

Part of the work of the MIT team was using machine learning algorithms to help the drones learn to recognize the orientations of a cluster of trees, so that the drone can tell if it’s already visited a particular part of the forest. In time, the drones will also be given object detection technology that would let them identify hikers walking through the forest, so that a relevant authority could help find the lost hiker and return them to where they’re supposed to be.

This functionality – arguably the core functionality of the entire program – has not yet been implemented. However, the system has been extensively tested in forest simulations at MIT, and two physical drones were flown in a forested area at NASA’s Langley Research Center in Virginia. The ISER paper states that “In both experiments, each drone mapped a roughly 20-square-meter area in about two to five minutes and collaboratively fused their maps together in real-time,” and that the drones in question “also performed well across several metrics, including overall speed and time to complete the mission, detection of forest features, and accurate merging of maps.”

As with other recent drone rescue technologies, the idea is to use unmanned aerial vehicles to monitor areas of potential danger faster and more efficiently than the human eye can. And Tian and his team have even more exciting plans for the future of the system. They want to make the drones less reliant on the ground station and have them instead communicate their maps wirelessly with each other. Onboard computation and wireless communication is already a crucial part of the system’s success, since GPS signals in forest environments tend to be weak or entirely nonexistent.

As we’ve written about in the past, Costa Rica is attempting something similar to the as of yet unnamed MIT project with a system it calls Irazú. However, Irazú is designed to monitor tree health and growth, while the American system is explicitly intended to save human lives. The latter system would also, if it becomes fully automated in the way MIT intends, use more advanced software to carry out its goals, although the Costa Rican project has higher quality scanning technology at time of writing.