UPDATE: 18 NOVEMBER, 2014 A little over two weeks ago we speculated below about when the Parrot Bebop drone will finally become available to customers. The day has come. That is the day we find out when :).

The first Bebop drones will start shipping for $499 in December, but in the US only and will be available online as well as through Best Buy and Apple stores. Bundled with the Skycontroller (see below) will actually put a $899 dent on your pocket. Now that we fear is a bit too close to the price you can get your hands on a more sturdy, sizable quadcopter that weighs more than 14 ounces (0.4 kg) and does not get blown away by a gust of wind. And remember, if would like to take advantage of the lower price point, you only get tablet or smartphone control via WiFi that is inherently laggy and range is also limited to like 100 meters or approximately 330 feet. In ideal conditions, that is. If not, you can safely half that.

First availability in the rest of the world such as the UK and Australia has been announced as “first part of 2015”. The price outside the US has not been announced yet. 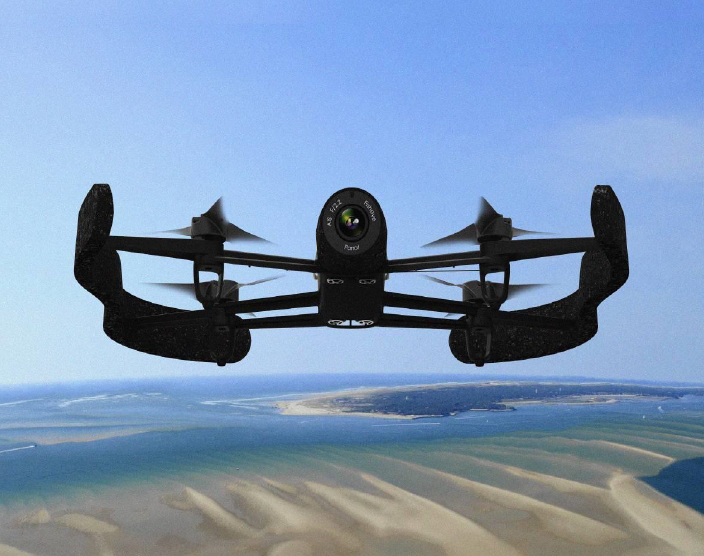 So the French drone manufacturer is conquering the US first, before fellow Europeans can get their hands on the Bebop.

French consumer electronics manufacturer Parrot has been very successful with it’s first quadcopter line called the AR Drone. Now in its second iteration called the AR Drone 2.0, the fairly little quadcopters have sold several hundred thousand pieces, as the online flight community of Parrot quads called the AR Drone Academy has well over 200.000 users.  Parrot’s current product line attempted to really bring remote piloting down to a level that is intuitive enough for anyone to adapt quickly. Unfortunately – to our opinion at least -, this attempt brought along limitations that made it really easy to reach the upper end of the AR Drone’s capabilities. They have an approximate maximum flying distance of 100 meters which to our experience is more like 50 or so in practice. Less agile controlling allowed by the WiFi connection was something many users did not enjoy at all, while flying the AR Drone by tilting your phone or tablet was easy and intuitive and 3D logging of flights is a fun feature, so many users had a love and hate relationship with Parrot quads.

For this reason,  many hobbyists felt inclined to move on to drones with better capabilities. While doing so, the best scenario for Parrot would be to offer a new enhanced line of products with better capabilities to the loyal users. Parrot management must have realized these issues also as they have announced the new Bebop Drone which is not a next iteration of the AR Drone, but a brand new product obviously built from the ground up. And they did the announcement early on – back this past spring – promising the Bebops to be available in “Q4”. Well, we are almost half way through the last quarter of the year with Christmas approaching and the Bebop is nowhere to be ordered. This is what one, otherwise probably happy user of the old product line had to say on Parrot’s blog:

“I’ve been waiting over six months and will be buying something from the competition next month unless pricing and delivery are released. It’s a pity you seem to have a good product but can’t reveal the price, I mean you have to have an idea of what you are going to charge per unit…makes one question if Parrot is a company to do business with.”

The new Parrot Bebop line is a lot more promising than the old one, with 3 axis stabilization – which does not seem to be a real gimbal system -, a real transmitter with sticks and iPad mount along with a 2km range.  This range sounds a bit extreme for such a lightweight unit, but hey who says you have to exploit it all? Staying in control could be a good unique selling proposition even if it would be insane to fly the Bebop to a 2 km distance.

So as much as we understand that Parrot had to announce this new line to keep users waiting for it, we feel that unless it gets released very soon and users can put it under the Christmas tree, an important momentum will be lost providing a perfect opportunity for competition to lure away the fan base. So we are anxiously waiting for the announcement and a chance to test the new Bebop. At the same time, you might want to hold your breath for a moment if you liked the AR Drone to see if Bebops become available. It could be worth the wait.

For the meantime, watch the video below and get acquainted with the specifications below and let’s see if the “yuppie drone” is something you would be interested in flying. If you are an AR Drone owner, please let us know how you feel in the comments below the article!

With Bebop Drone, Parrot demonstrates its technological expertise and confirms its commitment to the civil drone market. The Bebop Drone is a super-high-tech leisure quadricopter with features of a professional one!

Equipped  with  a  14  mega  pixels  fish-eye  camera,  the  Parrot  Bebop Drone  takes  video  and  pictures  of  the  world  in  a  180°  field  with remarkable image quality. Endowed with a fully digital technology of image stabilization, the Bebop Drone captures video despite the movements inherent in aerial footage.

The combination of numerous sensors give s it impressive stability and great maneuverability when piloting with a smartphone or a tablet.

For extreme sensations, the Parrot Bebop Drone can be piloted with an optional controller compatible with FPV glasses.

Parrot extends its range of leisure drones with  the Bebop Drone that takes professional-quality images.

Parrot Bebop Drone is equipped with a 14 megapixels « fisheye-lens » front-facing camera that records video in Full HD (1080p x 1920p) and streams live immersive views of the flight on the screen of the piloting Smartphone or tablet. 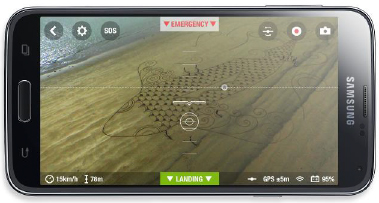 The pilot can control the angle of the camera simply  with  his  thumb,  directly  from  the piloting  application.  The  shifting  on  a  180° angle is fully digital.

Thanks to algorithms developed by Parrot engineers, the Bebop Drone benefits from an exclusive 3-axis image stabilization system that maintains a fixed angle of the view, regardless of the inclination of the drone and movement caused by turbulence.

The camera of the Parrot Bebop Drone is mounted on an ingenious structure with rubber shock absorbers that cushion vibrations.

The images taken by the Bebop Drone are digitally treated thanks to the Parrot P7 Dual core processor, its GPU and a proprietary Image Signal Processor.

The landscapes are captured on the 8 GB flash memory of the Parrot Bebop Drone with a gripping precision and sharpness.

After the landing of the drone, videos (MP4 format) and photos (JPEG and DNG formats) can be transferred onto the piloting device or a computer via Wi-Fi or via the embedded micro- USB connector.

The Parrot Bebop Drone is piloted via Wi-Fi through a free application available for iOS and Android Smartphone and tablets. To guarantee optimal stability of the quadricopter, without compromising maneuverability, the Bebop Drone integrates data coming from numerous sensors:

The Parrot Bebop Drone is equipped with 4 Wi-Fi antennas so it can manage the 2.4 GHz and 5 GHz frequencies in MIMO (Multiple Inputs Multiple Outputs) format. The Wi-Fi liaison uses the latest Wi-Fi 802.11ac. Depending on network interference, the pilot can select the frequency of his choice.

The Bebop Drone is capable of autonomous flight and automatic return to the take-off position. The Bebop Drone automatically records the data of each flight on Parrot cloud: “Pilot Academy”.

A featherweight of high technologies

About 50 engineers, specializing in digital signal processing, aeronautics, Wi-Fi radio and industrial design, worked on the development of the Parrot Bebop Drone, a highly performing high-tech jewel weighting 380 g without its hull (400 g with the hull) and enabling indoor and outdoor flights without the risks linked to the weight of more imposing drones. 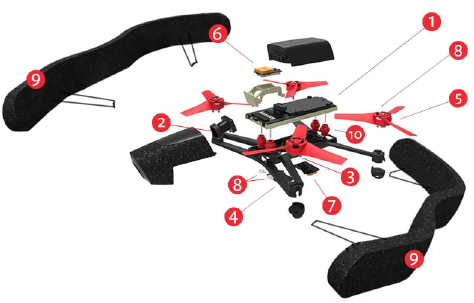 [one_half]01. Mother board (Parrot P7 dual core CPU and quad core GPU – 8Gb flash memory – All are fixed on a magnesium shelf that acts as electromagnetic shielding and as a radiator.)

08. Vertical stabilization camera (Every 16 milliseconds, an image of the ground is taken and compared to the previous one to determine the speed of the Bebop Drone) Ultrasound sensor (Analyzes the flight altitude up to 8 meters)

09. Hull in EPP (Clip and unclip easily to adapt to indoor and outdoor flight – Protects the propellers against potential bumps – Can be removed to reduce wind factor )

The  Parrot  Bebop  Drone  comes  with  a  free piloting application, FreeFlight 3.0, for iOS and Android Smartphones and tablets. The ergonomics of the application have been developed to offer a perfect ease-of-use and to let the pilot focus on the pleasure of flying.

On the welcome screen, the pilot accesses the ground functionalities: Piloting, photos/videos, flight plan, Cloud ‘Pilot Academy’.). When the ‘take off’ button is touched, the Parrot Bebop Drone starts its engines, takes off, stabilizes and awaits the pilot’s instructions. 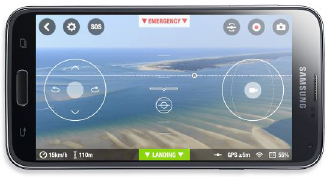 The  left  thumb  activates a virtual joystick  that enables  control  of  the  altitude  of  the  drone,  its rotation and movements while tilting the smartphone/tablet, to indicate the direction: forward, backward, left, right. The right thumb enables control of the angle of tilt of the front camera while flying. A  ‘flight  plan’ piloting mode enables the pilot to program an autonomous flight, using the functionalities of the GNSS chipset. When the ‘landing’ button is touched, the Parrot Bebop Drone lands smoothly. A ‘Return Home’ button makes the Bebop Drone come back to its take-off position, guided by GPS. 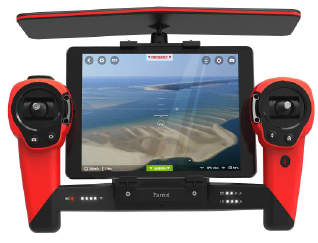 To benefit from a more powerful Wi-Fi connection, Parrot will offer the  Skycontroller as an option. Equipped with an amplified Wi-Fi radio and with 4 antennas, the Parrot Skycontroller extend the Wi-Fi range up to 2 kms. The piloting Smartphone or tablet is fixed on a shelf that is compatible with the vast majority of the tablets available in the market. The pilot takes the helm of the drone via 2 joysticks. For extreme sensations, it is possible to connect FPV (First Person View) glasses to the Parrot Skycontroller with the HDMI plug. Then, leaning the head will position the camera of the Bebop Drone!

*Expert pilots and beginners should take the helm of leisure drones in a responsible manner and in respect of the local rules and regulations.

Article Name
Will Parrot Bebop Drone Finally Be Released?
Description
Will the Parrot Bebop Drone be released after a promised release in Q4 of 2014? Many users are anxiously waiting for the new Parrot line or else they move on to other products.
Author
Zsolt Vaszary