A Spanish Architecture firm MuDD has used drones that spray a cement-like substance onto fabric to construct lightweight structures. The method eliminates the need for expensive construction equipment and could be used, not only to create temporary shelters in humanitarian disaster areas but also large structures in modern cities in the future, the designers say.

MuDD presented prototypes during Milan’s design week in April. The Milan Terramia prototypes are made of a bamboo structure wrapped in fabric. A quadcopter drone the sprays shotcrete, a method for adding cement, out of a long hose. Shotcrete typically requires a crane or human operators to applied effectively.

Once the shotcrete is applied, the team will then use the drone as a drying machine where it will blow air through the hose, giving the structure stability and flexibility at the same time. This is important in locations experiencing strong winds or suffering after-shocks following a major earthquake.

See the MuDD drone in action in Milan:

The larger idea here is to automate the more labor-intensive aspects of earth architecture, the process of building with natural materials. Earth architecture is generally more sustainable for the environment than conventional architecture.

MuDD’s principal Stephanie Chaltiel says that building with local materials such as bamboos, clay, sands, and rice husks offer a high sustainability factor. However, it can require extensive manual labor and is time-consuming and expensive compared to other construction methods.

It took five days to build the prototypes, so have the drones spray speeds up the process. It could have taken weeks otherwise. 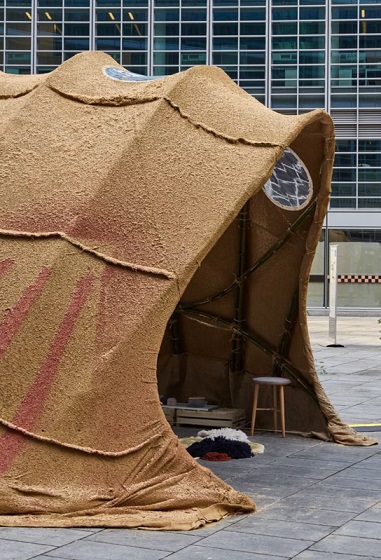 The drone spray technique was developed with drone companies RCTake-off and Euromair plus researchers at the Catholic University of Louvain, Belgium, with Chaltiel working in collaboration with Summum engineering, Canyaviva, and AKT II.

One benefit of using drones is that it allows the shotcrete to be used on tall buildings and freeform facades. Imagine a skyscraper shaped like of these canopies.

As for the design prototypes, Chaltiel says she was influenced by other academic training and field experience. She studied at CRATerre in Grenoble, France, receiving guidance from earth architecture experts. Her experience on the ground building with native cultures in Mexico and French Guiana helped her discover the potential of such techniques especially if paired with automation.

Aerones, a drone company based in Latvia, has also been testing drones equipped with hoses in an attempt to clean wind turbines and windows on high-rise buildings. The company used a 12-rotor drone for the purpose of cleaning as it has hoses and sponges. The drone could clean 20 times faster than traditional human-powered methods, and the company even pointed out this method offers a greater level of safety than other methods. Aerones is currently developing a similar system that could aid in firefighting.

While MuDD’s consturction method is still under development, the company is optimistic that its project’s potential in assisting humanitarian efforts on a global scale.