Last month we wrote about a ban from the FAA on attaching weapons to drones. With that in mind, it would seem crazy to attach a nail gun to a drone, something that could pretty easily be argued falls into their definition of a weapon. Before we start shielding ourselves from the onslaught of weaponized drones let’s take a look at exactly what’s going on here, and why it’s important.

The drone in question is actually part of a research project out of the University of Michigan. In it, they attached a nail gun to a drone, and then have the drone nail shingles to a roof. Using a ground based systems they are able to track the position and movement of the drone. Then, using cameras on the drone are able to pinpoint the exact location where the nail needs to be driven through. 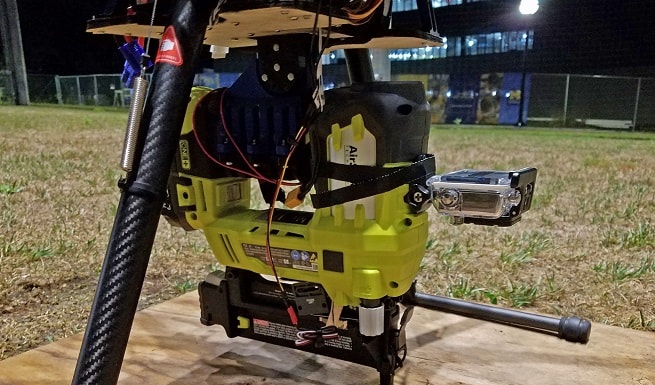 This allows the drone to work as a roofer, and actually shingle a roof. There’s still some problems to solve before it starts replacing humans, but it looks to an interesting take of autonomous drone work that promises to make a very dangerous job safer. Using drones to help with dangerous jobs and keep people safe is always a plus in our book.

They’ve also dealt with some difficult problems like keeping the drone from recoiling and getting the nail in exactly the right spot. These can be particularly difficult, especially considering the drone is hovering in the air; even the smallest movements could throw the whole process off. It really is a feat of engineering that something like this is even possible at all.

The big draw here for continued research is safety. Roofing can be a dangerous job, and only more so when you’re lugging a nail gun up two or three stories. Replacing this type of work with drones will make the whole process safer for all involved. This is really the appeal of a lot of this drone technology, making work safer and taking over more dangerous jobs. This is a particularly interesting case as it’s one of the first instances where manual work has been taken over by a drone. In many other cases we saw drones being used for things like their camera or with attached sensors, so seeing a new take on autonomous work is always interesting.

It’s not all good news though, in terms of real roofing work there’s two main problems facing the drone. The first is battery life. As of right now, the drone used in the experiments only has a 10 minute flight time. There’s some ideas about a ground tethered generator to provide more power, but this idea hasn’t been tested yet. With only a 10 minute flight time there’s a very limited amount of work the drone can do before it needs to recharge.

The next is simply the speed; the drone is significantly slower than a professional roofer. Using a fleet of drones might be an option, but then there’s still the concern of battery life and powering all those drones. As of right now, the drone is only able to handle small sections of a roof before needing to recharge which is not practical for actual work at this point.

These pose a bit of a problem together, and show that we’re still a bit far off from drones taking all of the roofer jobs, that’s also not considering all the new jobs created for operating and managing the drones.

Overall, while the idea is still far from practical, the work being done is certainly exciting. While drones have been used a lot for simple tasks, this is one of the first instances where drones are taking on more skilled tasks. A few more years of development on this technology and who knows where drones will be!