One of the more interesting recent developments in the consumer drone space has been the unprecedented rise of foldable drones. From cheaper models like the Zerotech Dobby to this year’s mighty Mavic 2, it seems that drones you can carry in your pocket are in high demand this holiday season, and it will be interesting to see where this highly portable technology goes in the future.

But while any drone enthusiast is now familiar with drones you can fold with your hands, you’ve never seen a drone that can fold itself in mid-air. That is, until today:

This unnamed quadcopter is the result of a collaboration between two academic institutions in Switzerland: the University of Zurich and the École polytechnique fédérale de Lausanne, or EPFL. It was designed with the intention of helping first responders and rescue efforts. Disaster sites (the famous case of the boys trapped in the cave in Thailand earlier this year comes to mind) rarely conform to shapes and sizes that are easy to navigate, which is why it would be necessary for such a drone to change its shape.

“The morphing drone can adopt different configurations according to what is needed in the field,” says Stefano Mintchev, coauthor and researcher at EPFL. He further stated that the drone was inspired in part by the way that birds fold their wings to fly through narrow passages, making this the second research drone we’ve seen in the past two months that was inspired by real-world biology. 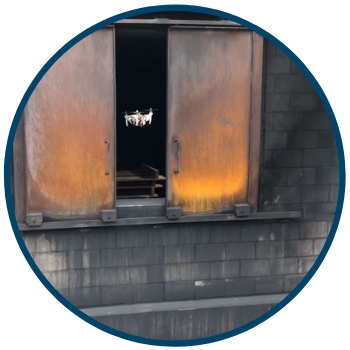 “Our solution is quite simple from a mechanical point of view,” says Davide Falanga, researcher at the University of Zurich and the paper’s first author, “But it is very versatile and very autonomous, with onboard perception and control systems.” The quadcopter itself has four propellers in a standard X shape when unfolded, but shrinks to an H-shaped or O-shaped configuration when folded to fit into a narrow passage as in the video above. It can also transform into a T-shaped configuration with an onboard camera in front of the drone for situations that require photo or video to be taken from as close to a subject as possible.

The proof of concept seen above is impressive enough (it looks like a real-life Transformer!) but the researchers say that it’s still not done. They want to improve the body of the drone and add additional joints so that it can fold in a full three dimensions, offering a greater variety of shapes to deal with a greater variety of spaces that rescuers may encounter. They also want to make the drone fully autonomous so that it can automatically adapt to any obstacle or oddly-shaped opening without the input of a pilot.

“The final goal,” Falanga explains, “is to give the drone a high-level instruction such as ‘enter that building, inspect every room and come back’ and let it figure out by itself how to do it.” This would make the drone easy for anyone to use, even if the rescuers in question don’t have advanced drone training.

The quadcopter may not be ready for primetime, but for now, at least we get to enjoy one of the coolest-looking new drone designs in a long time.