You’ve heard of drones delivering packages, but what about drones delivering people? That’s right, companies like Airbus that have been using drones in innovative ways and now are working on autonomous drone Taxis that can carry human passengers. These air taxis will be able to fly over traffic, and provide a new way to travel in urban areas. The area is ripe for advancement, and several big name players, including Airbus, have already stepped in to start developing the technology. 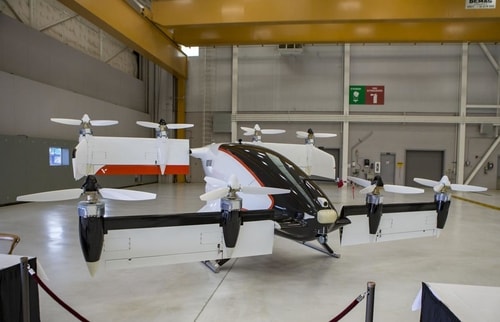 Airbus is joined by competitors like Boeing and many others that are working on similar technology. Airbus recently completed 114 flights of their drone “Vahana”. This was all done with no crashes or accidents, which is very impressive considering the relative newness of the technology. Airbus’s drone also works entirely autonomously, there’s no human pilot needed, it’s all computer controlled. Airbus has achieved quite the feat here in building not only a drone capable of carrying passengers, but also piloting without the need for a human pilot.

This technology looks really promising to make travel through dense, urban areas easier. Unlike a traditional taxi, there’s no waiting in traffic when flying through the air. Right now, the drone features a range of about 31 miles with 20 minute flight time on a single charge. That’s enough to get some serious distance, even trips from out from the suburbs to the city center. Airbus has said that right now the cost for a drone trip is comparable to that of a traditional taxi, another point in its favor.

Right now, Airbus’s main focus is on battery life and autonomy. They want flights that can travel long distances over time, as well as vehicles that require no pilot, which are both key points to major adoption worldwide. In fact, Matt Deal, the head of flight testing, said that the drones future is directly tied to advancements in battery efficiency. That shows just how important long lasting and light batteries are to drone advancement. Right now, the battery alone makes up over 40% of the total weight of the vehicle, so reducing that weight while keeping or improving efficiency would be a big win.

The technology is quickly progressing, but there’s still a couple big issues in terms of adoption. The two biggest are probably government regulation and public perception.

For the government’s part, there’s currently little to no regulation setup to govern the space. Companies aren’t going to just be able to set up flying taxi services in cities without going through layers of red tape. It’s certainly going to take some time for regulators to catch up. Just look at delivery drones and the sorts of issues companies have to face there to get a sense of the speed that regulators keep up with technology.

The other big problem is public perception, if no one wants to ride in your air taxi then there’s no point in investing money setting up the service. While advancements in technology will put some people at ease, there will still certainly be work in pitching the safety of the rides. That really is the big key, safety. Companies like Airbus will have to make sure to put together marketing campaigns that focus on the safety, and work to put potential riders minds at ease.

The advancement here and the race to build the first true air taxi will certainly be exciting to watch. With so many big names in the game, it’s only a matter of time until the technology becomes a reality. There’s certainly still a lot of work to do, but the companies behind this tech are known to do just that, get stuff done, as well as have the pockets to finance such projects.