Many artists have used drones to create colorful light shapes in the sky. Drone light shows have become popular recently sparking much interest among people. Russell Klimas was curious in seeing just what kind of fun shapes he could create. He took drawing shapes in the sky to the next level by creating fun and elaborate shapes such as Pikachu, the Hamilton logo, and Batman signal. People have been loving the images, and want to recreate them for themselves.

In just fifteen minutes Klimas was able to create these images in the Colorado sky. He used a Lumecube, a powerful LED light, that he attached to his DJI Mavic 2 Pro drone to create the images.

Along with this, Klimas used Google Earth and a $10 app called Litchi to help him map out the path for the drone. There are other apps but Klimas says Litchi has more finesse as it can connect directly to Google Earth. Google Earth allows for one to get really detailed in where you want the drone to fly. He’s explained his intricate process for drawing the characters in these apps for others to experiment with. It’s a somewhat complicated process to learn, but Klimas explains how to use it to create stunning images. 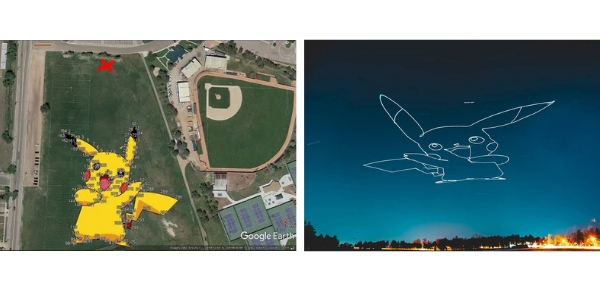 Once your overall image in Google Earth and Litchi is set, Klimas says to manually set any waypoints. More intricate shapes will have more waypoints. If your shape is more intricate, you will want to have a second drone battery as the shapes will require more power especially if you’re drone is smaller. Klimas explains that the Litchi app only allows 99 waypoints for each path you program so you’ll have to upload a new path if you have more than 99 waypoints. Covering your lens while you upload will make sure you don’t get bright spots in your photo.

After the paths are working, Klimas says to make sure you change the altitude. Working on a horizontal plane could change your location for where you are shooting, which could squish your light painting. You can change the altitude with the Litchi app. 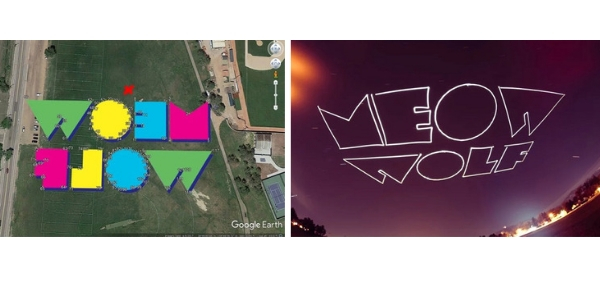 Using a second camera with a very wide lens and a slow shutter speed, he captured the images in the sky. These settings are important so the camera can capture the effect of the light streaks as the drone draws the images.

Klimas warns not to fly your drone too fast during a light painting mission. He kept his drone between 7-11 mph to allow the drone to more accurately follow the waypoints and not overshoot them. You don’t want to have to backtrack before going to the next point. Also, when using the Litchi app make sure the curved turns are turned off so the drone can precisely follow the waypoints and create an accurate image.

Doing a test image is a great way to start to make sure everything is in the correct alignment and you can practice changing out your drones batter if need be. 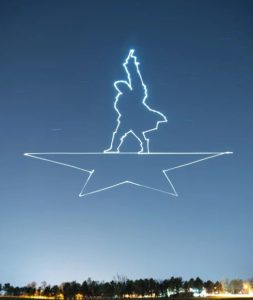 With drone light shows becoming popular, many artists are using their drones to create stunning light images in the sky. Russell Klimas has used his own talents to create his own charming images such as Pokemon characters. Even beginner drone pilots can try their hand at creating light images with the steps that Klimas has laid out.