I am sure you also love unique moments filmed from a special perspective. A planned and controlled demolition is a situation when you don’t need to catch the moment by chance. You can plan ahead and that is exactly what this team did when filming aerial footage of an implosion with 3 quadcopters.

At 5pm on Sunday 31st May 2015, the earthquake-damaged police station in Christchurch central was brought down by a controlled implosion.Ceres NZ, the demolition contractor, partnered with US-based specialist contractor Controlled Demolition Inc. (CDI) which has carried out more than 9,000 successful building implosions around the world.
Implosion was chosen over conventional demolition for a number of reasons – a shorter demolition timeframe, less disruption to neighbours, reduced traffic disruption, improved worker safety – as contractors are not in the building as long and implosion is the more cost-effective method. The position of the safety fences around the site meant the public’s ability to view the implosion was extremely limited.

Helicam Pro (www.helicampro.co.nz) were contracted to provide a livestream to media via drone based in launch positions inside the cordon. 2 DJI Inspire’s were used to capture the wide angle views from either direction, while a DJI Phantom 3 drone was used to capture the vertical collapse from directly above.

The filming involved weeks of planning and co-ordination with Air Traffic Control, property owners, the demolition company and the media. Pretty amazing footage. 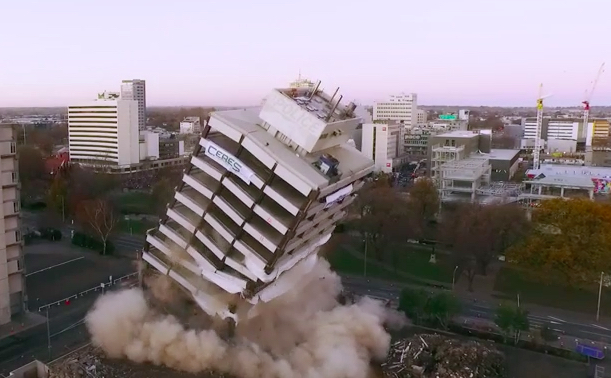 At 5pm on Sunday 31st May 2015, the earthquake-damaged police station in Christchurch central was brought down by a controlled implosion.