When it comes to high-end drones, let’s face it – DJI reigns supreme. We certainly can’t get enough of their Phantom line of larger videography quadcopters, and like the rest of you we here at Dronethusiast are eagerly awaiting the launch of the impending Phantom 5.

But while we all know DJI for their more recent technological innovations – obstacle avoidance systems, high-quality cameras, and the like – it can be easy to forget that one of their most important contributions to the industry has been the matter of size. When the first DJI Phantom came out half a decade ago (has it really been that long?) it was considered the smallest professional drone, and the company has continued to prove that “size matters not” when it comes to high-quality UAVs.

With the release of the Mavic Air earlier this year, DJI now has three compact drones to choose from. 2016’s Mavic Pro impressively put a 4K camera in a foldable drone, while last year’s DJI Spark added the ability to control the vehicle with a series of hand gestures. But which of the three is right for you? That’s the topic of today’s article, where we’ll be looking at these three products and trying to pick a winner.

You might disagree with our choice, and if you do, please be sure to (respectfully) let us know in the comments.

We’ll start by comparing the oldest of these drones to the most recent. At first glance you might think the Air would be the obvious choice here, since the Pro is two years of innovation behind and costs $200 more. But don’t be fooled – this older drone still holds its own in several key areas. 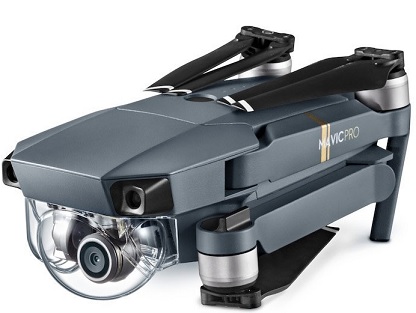 The Mavic Pro has a more distinct visual design right off the bat with its clear camera shield, which also makes the drone more durable and more portable (since you don’t have to worry about protecting the camera.) The Pro is the largest of the three drones with its 335mm diagonal, but it folds up to be about the same size as the Air at 83x83x198 millimeters, so even though the Pro weighs twice as much the two drones are more or less equally portable.

The Mavic Pro has GPS as well as a rudimentary Gesture Mode that lets you take pictures by waving your hands, although that’s mostly a novelty feature which DJI recommends using primarily for selfies (not that we’re knocking the joy of a good selfie.) It also has an altitude hold mode and a certain amount of Flight Autonomy – you can tell the drone to track someone and it will follow them while taking video. 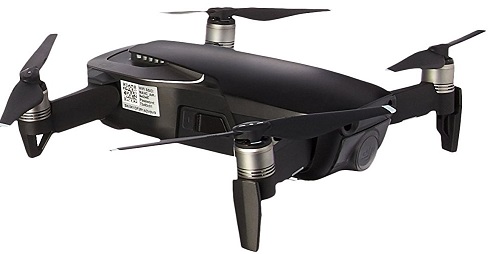 However, thanks to the benefit of two years’ worth of technological advancement, the Air has all of these features and more. The Air’s vision positioning system uses four cameras instead of two so that it can build a much more complete 3D map and even fly backwards without fear of crashes. It features “Smart Capture”, also known as Gesture Mode 3.0, which more accurately captures gestures and which has a much wider range of commands, allowing you to effectively control the drone hands-free and making the feature much more than a gimmick. Finally, the Air introduces the QuickShot flight mode introduced in the Spark, which lets you choose from six different types of shots which the drone will take automatically, making it easy for even inexperienced pilots to capture great images and video.

When it comes to innovative features, there’s not much competition – the Mavic Air is the clear winner here.

The DJI Air promises 21 minutes in the air with no wind. Not bad, but not nearly as impressive as the Pro, which can fly for 27 minutes in ideal conditions and out-classes the Air in every case. The Mavic Pro wins this round. 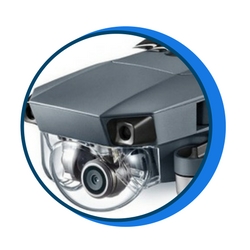 The Mavic Pro’s camera capabilities were its main selling point over the Spark, but how does it compare to the Air? Both cameras have 3-axis gimbals and identical ISO and shutter speed specifications. The Pro has more available resolutions including Cinema 4K support, which is 4096×2160 at 24 frames per second, which is a higher resolution than the newer drone and which is an essential setting for professional filmmakers. However, the Air can capture HD footage at 120 frames per second, while the Pro only captures that many frames when recording in 720p. 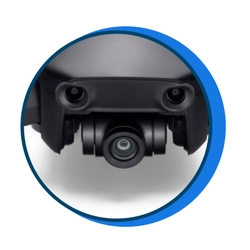 Both drones can also capture panoramic images, but the Pro assembles the full image on your smartphone while the Air does so directly from the drone, meaning that the latter can produce 360° photos faster and in higher resolution. As for other forms of still images, you can see an in-depth comparison of the two cameras here. The Pro takes better pictures in AEB mode (where you edit the images yourself), but the Air has much better exposure in HDR mode (where the drone decides how the picture should look).

In the end, the Mavic Pro narrowly wins this competition. Both are excellent cameras for hobbyists, but the Pro is (as the name implies) a better choice for professional photographers and provides slightly better images at a wider range of resolutions. 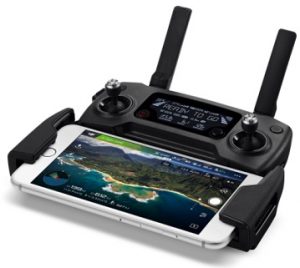 It’s a good thing you can control the Mavic Air so well with gestures, because the actual controller itself has a lot of problems. Unlike the Pro controller, it doesn’t have a screen for streaming real time flight footage, lacks an exposure dial, and is missing the 5-axis joystick which is used for assigning custom functions and controlling DJI Goggles. 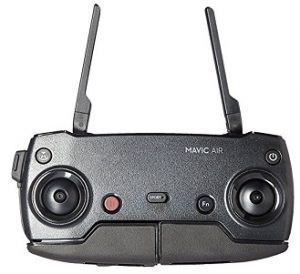 The Air’s controller also transmits drone data in 720p, lags more, and has a less reliable signal, while the Pro’s Ocusync system remains one of the most reliable, stable, crystal-clear and overall best drone transmission systems around.

Finally – and this is sort of a nit-picky complaint – the Air’s controller is mostly plastic instead of rubber and metal, making it a little less comfortable to actually hold in the hand. The Mavic Pro takes this round without even breaking a sweat.

One of the main advantages of the Mavic Air is that it costs $799 even though it’s brand new, while the Mavic pro still costs $999 from the DJI website at time of writing.

The Spark turned heads when it first came out, despite not being foldable and having an inferior camera to the Pro’s, for providing a great number of features in a cheap and extremely small package. But has it been outclassed by the newer model? Read our full review on the DJI Spark here.

Let’s break down the points of comparison. 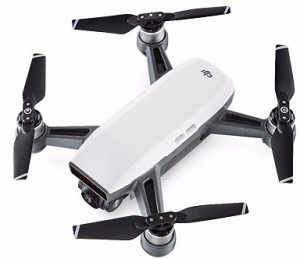 The Spark is much smaller than the Mavic Air, fitting comfortably into the palm of your hand with a 170mm diagonal (compared to the 213mm diagonal on the Air.) However, the Spark cannot be folded, meaning you must either transport it very carefully or purchase a bulkier case to avoid damaging the propellers and the struts. In terms of aesthetics the two drones look nearly identical, though the Spark is a touch sleeker.

The Spark has much more advanced obstacle avoidance and Gesture Mode features than the Pro, but still pales in comparison to the Air. The Spark only has downward and forward sensors which means that it can’t safely back up on its own like the Air can, and its tracking system is equal to the Pro’s in power.

Once again, the Mavic Air wins in terms of features, especially considering the Spark’s ironic lack of portability.

The tiny Spark only stays in the air for 16 minutes under optimal conditions, while the Mavic Air can manage 21 minutes without wind. 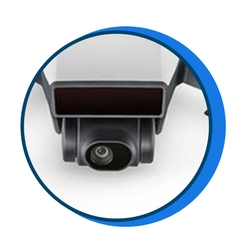 The Spark has by far the least sophisticated camera of the three drones. It lacks a proper 3-axis gimbal and only gives the user pitch and roll support, with changes in yaw requiring you move the entire drone. It offers a maximum still size of 3968×2976 pixels, a maximum video resolution of 1080p at 30 frames per second, and a field of view equivalent to 35mm film.

As previously stated, the Mavic Air comes with a full 3-axis gimbal, can record 4K footage at 30 FPS, and can record 1080p video in 120 FPS. Even when it was brand new the Spark’s camera was a bit of a disappointment, and the Mavic Air wins this competition very handily. 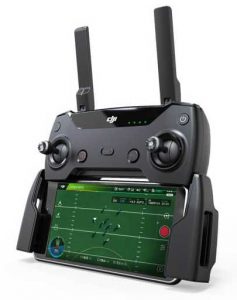 In its standard package the Spark does not come with a controller and can only be flown with your phone or mobile device using the DJI GO 4 app. This can be convenient for beginners and makes the drone a lot cheaper, but offers less accurate control and reduces how far the drone can fly away from the controller. You can, however, purchase a controller for $200 extra, which added to the cost of the drone is still cheaper than the base price of the Mavic Air.

If we’re discussing the standard packages, the Mavic Air wins handily. However, if you spring for the Spark controller, the two are essentially equal in quality (and neither is quite as good as the Pro).

If you’re just using your phone, the maximum range of the Spark is 50 meters high and 100 meters horizontally. If you purchase the controller you can get the range up to a much more usable 2 kilometers, but sadly this still falls short of the Mavic Air, which as previously stated has a 2-4 kilometer range in most territories.

The price is the one area in which the DJI Spark beats out the Mavic Air, at a price of $399 USD over $799 USD. Even if you purchase the controller as part of the Spark’s “Fly More” combo it only costs $599, which is still an incredible deal.

The Spark is a fine choice if you’re looking for a DJI drone on a budget (and simply by virtue of being a DJI product it’s better than a lot of the other compact drones out there), but it really doesn’t have much to offer the serious drone enthusiast. The features that seemed impressive when it came out – like the Gesture Mode that let us all feel like we were controlling the drone with Jedi mind tricks – are all outclassed by the Mavic Air, and the lack of portability and inferior camera really hold it back from the rest of the pack. The Air itself is an excellent choice for most users, designed to be very accessible and featuring the newest and best features at a price that’s far from financially ruinous.

But when you compare all of the features in totality, we have to stick with the classic and recommend the DJI Mavic Pro over the other two drones in this article. The Pro still has the best camera, the most precise controller, and the best flight time and range. It’s the only one of these three drones that could be used by a professional photographer or videographer, and it maintains its high quality in a body that’s stylish, durable, and just as compact as the Air. If you don’t mind spending just $200 more, this is still the undisputed champion of the DJI Mavic line.

Agree? Disagree? Be sure to let us know in the comments!

Looking to compare more drones? Read about our Top 32 drones for sale here. And read about other companies’ attempts to compete with the Mavic Pro by clicking here!