If you’re looking at this website, you probably love drones as much as we do. But how much do you actually know about the history of this great hobby and this wonderful technology? Would you believe the first unmanned aerial vehicle was created almost 170 years ago? Do you know what started the transition from drones as a military force to drones as a commercial toy venture? These questions and many more will be answered in this, Dronethusiast’s comprehensive History of Drones. 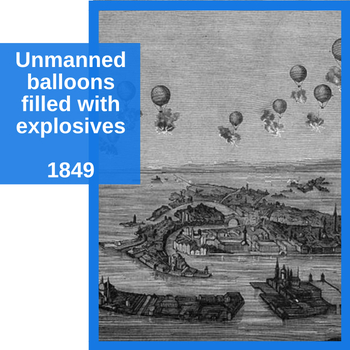 The first stop in our drone history timeline is the very early history of drones. First, for those who don’t know, it’s important to establish that the word “drone” simply refers to any aerial vehicle that is unmanned.

That is, the pilot does not sit or stand within the vehicle itself.

By this definition, the earliest unmanned aerial vehicle in the history of drones was seen in 1839, when Austrian soldiers attacked the city of Venice with unmanned balloons filled with explosives.

Some of these Austrian Balloons were successful, but a number of them blew back and bombed the Austrians’ own lines, so the practice did not become widely adopted.

The invention of winged aircraft changed everything for manned and unmanned vehicles alike.

The Wright Brothers’ famous Kitty Hawk flight was in the autumn of 1900, and only 16 years later Great Britain developed the first pilotless winged aircraft: the Ruston Proctor Aerial Target.

The Aerial Target was based on designs by Nikola Tesla and was controlled with radio control much like the drones of today (though the technology was much more rudimentary.)

Finding drone gifts for the holiday season can be tough, shop these great Cyber Monday drone deals with Dronethusiast! Also check out what drones are for sale for Black Friday 2019. 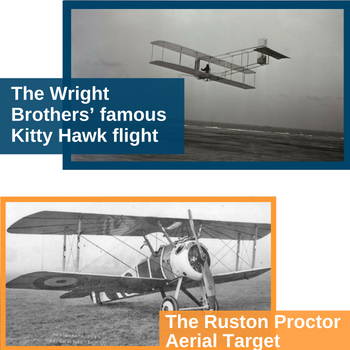 The Aerial Target was essentially a flying bomb which England hoped to use to counter the German Zeppelins, though its inventor thought it could also be used against ground targets.

However, after several failed prototype launches, the British military chose to scrap the project, believing that unmanned aerial vehicles had limited military potential. How wrong they were.

A year later, an American alternative was created: the Hewitt-Sperry Automatic Airplane. After an impressive test before representatives of the US Army, a more advanced mass-producible version was commissioned: the Kettering Bug.

The Bug was a marvel of 1918 technology, but it was developed too late to be used in the war and was never deployed in combat. 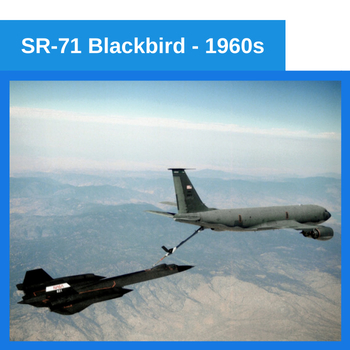 UAV technology improved throughout World War II (which saw a number of technological advancements as we all know) and into the Cold War as well.

But they were largely seen as unreliable and expensive novelties – nowhere near as reliable as the exciting new innovations in manned aircraft like the Flying Fortress and the SR-71 Blackbird.

It’s known that both the US and the USSR used unmanned drones to some extent to spy on each other during the Cold War, but the specifics are still classified and the leaked reports are often contradictory.

What we do know is that modern drone warfare began in earnest in 1982, when Israel coordinated the use of battlefield UAVs alongside manned aircraft to wipe out the Syrian fleet with very minimal losses. The Israeli Air Force used military drones to recon the enemy’s position, to jam communications, and to act as decoys that would prevent the loss of pilot life. 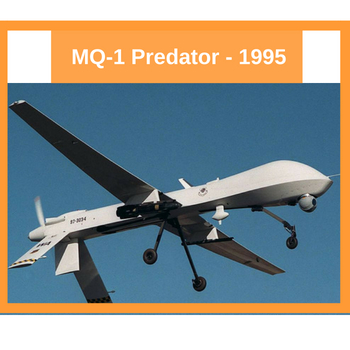 The technology was nothing new, but the IAF figured out how to use drone technology in a way that would make operations more successful, and international interest in drone hardware picked up significantly. The US, example, spent tens of millions of dollars on new drone contracts in 1984.

Modern military drones typically serve one of two purposes. The first is combat surveillance, in which a human pilot uses radio control to fly a drone to different waypoints to scan and mark enemy positions.

The second is tactical reconnaissance, in which a mini drone (not much larger than the commercial drones we write about here in most cases) flies on autopilot to predesignated targets to take pictures before returning to a home base.

What about the famous MQ-1 Predator and the drone strikes we’ve heard so much about? Well, it’s true that drones are often used for offensive actions, but their actual use in such cases and the technology that allows drones to destroy targets is top secret in most cases. As for the Predator itself, it was retired in 2019. 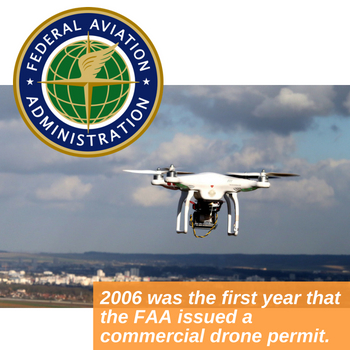 According to a Wall Street Journal report, the history of non-military drone use began in earnest in 2006. Government agencies for disaster relief, border surveillance and wildfire fighting, while corporations began using drones to inspect pipelines and spray pesticides on farms.

As unmanned aerial vehicle technology improved in the military sector, those same technological improvements could be used in the private sector.

However, you may be surprised to hear that recreational drone use actually only took off (pun intended) very recently, and it’s grown fast. One of the main reasons for this is that the Federal Aviation Administration had to be convinced that commercial drones were safe to allow and determine proper regulatory measures.

2006 was the first year that the FAA issued a commercial drone permit. They issued an average of two of these permits a year for the next eight years – that was all that was requested.

Then, in 2013, Amazon CEO Jeff Bezos announced that the company was considering using drones as a delivery method, igniting the public’s interest in drone history. In 2015, the FAA issued 1000 drone permits, a number which more than tripled to 3100 permits in 2016 and which has continued to grow in the time since.

Where Drones Are Going 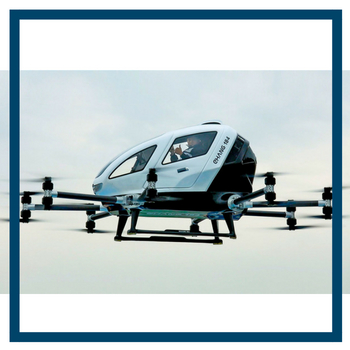 Now that the technology’s growing exponentially, it’s hard to say what the future of our drone history will look like. But we think we have a pretty good idea. We’ve studied and written about some of the up-and-coming startups and drone companies that are leading the way in 2018.

Altair Aerial is creating easy-to-fly drones in the hopes of getting even more people into the market with low-cost beginner-friendly UAV technology. The Chinese company EHANG wants to turn drones into a taxi service and has built a quadcopter capable of carrying passengers. And Flyability is leading the way to create drones that are able to operate indoors in complex, confined spaces along with people.

Meanwhile, if you want to see what the commercial drone industry looks like in the present day, you can check out the best drones currently for sale in our comprehensive product guide. You might be surprised at the level of high technology on offer. Plus, drones are fun and useful tools that everyone can enjoy.

From exploding balloons to the unmanned flying taxi, the history of drones is a fascinating topic. I greatly enjoyed getting the chance to write this article, and I hope you all enjoyed getting to read it. If you have more great drone history facts be sure to let our readers know in the comments, and please drop us a line if this drone history timeline has been helpful to you in some way!