If you are into quadcopters or just considering getting one and follow news on the topic, you will hear a lot about the infamous “flyaway” situations mainly associated with the most prevalent  quadcopter out there, the DJI Phantom.

In a recent article, Wall Street Journal said that the burgeoning industry is struggling to overcome a problem known as “flyaways,” when devices go rogue and fly off from their users. Drone makers say their devices can zoom off or drift away with the wind for a variety of reasons, including software glitches, bad Global Positioning System data and lost connections to controllers. Many incidents end with the devices barreling into buildings, trees or bodies of water. 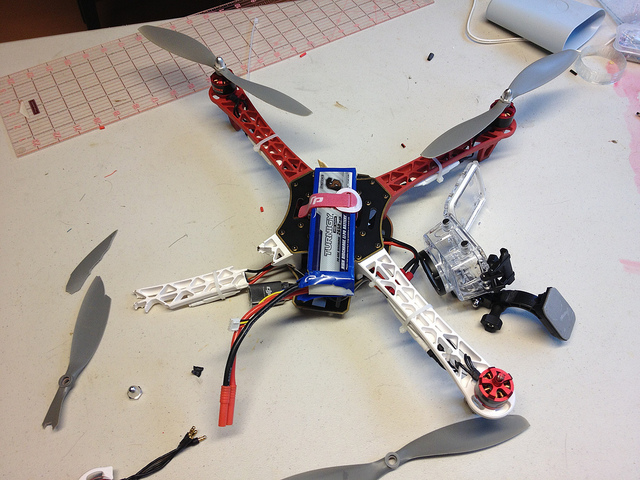 Drone after a bad crash.

At the same time, if you visit groups and forums on the topic, people there will mostly agree that the majority of the potentially dangerous situations are caused by piloting error.

There are no exact figures on the number of malfunctions let alone pilot errors, but according WSJ says (citing an online forum for drone users) has a poll of 774 people who said they owned DJI Phantoms showed that nearly a third had experienced a flyaway, including 122 users who never saw their devices again. DJI said its internal figures suggest the percentage of users reporting flyaways is decreasing as it improves its software and fail-safe functions.

Drone makers say they include functions designed to prevent flyaways, and they are adding sensors and improving software to strengthen the safeguards.

“We have to make something that cannot go wrong in any scenario,” said Frank Wang, chief executive of SZ DJI Technology Co. His Shenzhen, China-based company makes the world’s most popular consumer drones, 2.8-pound quadcopters called Phantoms that are commonly featured in flyaway videos online.

Drone makers say they are cursed by their biggest success: the rise in novice users. Technology has made the devices cheaper and easier to fly, giving anyone who can spare a few hundred dollars access to small aircraft that can climb thousands of feet. As a result, drone makers say, many flyaways occur because untrained pilots struggle to steer drones to safety if the devices lose orientation because of bad GPS data or issues with their compasses. The companies say flyaways can also happen when users don’t calibrate the drone’s compass or configure its fail-safe functions. You can imagine if a novice user does his takeoff in a rush and does not allow his quad to lock the home point. So when it loses contact with the transmitter, it goes into failsafe mode and heads home. Home being five miles away at a previous flying location. That is considered a flyaway… And a result of pure piloting error.

Even military-drone operators have struggled with flyaways for years. In 2010, a 3,150-pound unmanned helicopter glided autonomously for 30 minutes—some of that in the restricted airspace of Washington, D.C.—after a software glitch severed its connection to its U.S. Navy pilots. And in October, U.S. Army pilots lost control of a hand-held drone over Columbus, Ga., telling air-traffic controllers the device was headed southwest and would run out of fuel in 40 minutes, according to federal records.

Finally, here is a quick video from Mark with his suggestions on how to avoid crashes and flyaways if you fly a DJI Phantom. It’s also a good demonstration of the Failsafe function with actual video of a “situation”.

Stop in and read more about tablets for the Phantom 4 here.

Article Name
How To Avoid Crashes And Flyaways
Description
How to avoid flyaways and crashes using your DJI Phantom 2. Video and online course inside.
Author
Zsolt Vaszary