Last weekend’s FAI International Drones Conference and Expo in Lausanne, Switzerland, brought together hundreds on drone industry leaders and experts to discuss the future of drone innovation and compete for a $20,000 prize based on a theme of “Drones for Humanity.” 2018 was the second year this event was held, and the prize – known as the Prince Alvaro de Orleans-Borbon Grant – was awarded to an Italian engineer named Vincenzo Navanteri, who has developed a concept for an autonomous ambulance drone. If further developed and deployed, this drone could save hundreds of lives.

The proposed drone would act as a flying stretcher, carrying a single passenger for a distance of up to 150 kilometers at speeds of around 100 km/h. Passengers could weigh up to 120 kilograms (about 264 pounds).

The secret that would make this drone work? Replacing electronic batteries with two gas-powered turbines, each with its own high-speed generator and independent gas storage. Navanteri said that this technology is already patented, but that his team hopes that “our technology will help move drones forward, away from simple 20-minute battery life.” It’s understandable that the Proger team would want to prove away from electricity – there isn’t a LiPo battery in the world (yet) that can carry this much weight for long. But the use of fossil fuels in industrial drones is already a concern for many drone manufacturers and enthusiasts who feel that their hobby should stay electric.

As for the ambulance drone itself, Navanteri explained that “The drone is intended mainly for rescue and first-aid missions…for urgent interventions in remote villages, or where access is temporarily difficult. Anywhere affected by any type of disaster – earthquakes, floods, even nuclear contamination zones.” This, as we know, is one of the great strengths of drone technology over traditional aircraft – drones can get into tight areas that larger craft cannot.

The ambulance drone would fly from a hospital or medical facility to a given set of GPS coordinates, then fly back after an on-site paramedic loaded the patient into the flying stretcher and strapped them in. An integrated oxygen supply would allow the patient to breathe while the cockpit closed over their head, and medical monitoring equipment, onboard cameras, and a two-way communications system would allow medics on the ground to monitor the patient’s status and keep in contact with them during the flight. Navanteri’s vision for the drone involves minimal piloting, as he hopes to create a return-to-home function like we see on many household consumer drones that will allow the drone to more or less fly itself back to its home base.

One major difficulty that Navanteri did not address was what kind of obstacle avoidance systems this autonomous ambulance drone would use. Sure, lots of modern drones have built-in obstacle avoidance, but as anyone who’s purchased a DJI drone knows the technology still has a way to go. Obstacle avoidance drones will often not recognize tree branches as solid obstacles that need to be avoided, and while it’s merely annoying when your prosumer drone gets tangled in a tree, it could be a real problem for a drone that’s going to be carrying human beings. Particularly if a crash causes a person in critical condition to become even more injured. We at Dronethusiast would like to hear more about this important aspect of the ambulance drone’s design before we start getting excited for the potential of this technology. 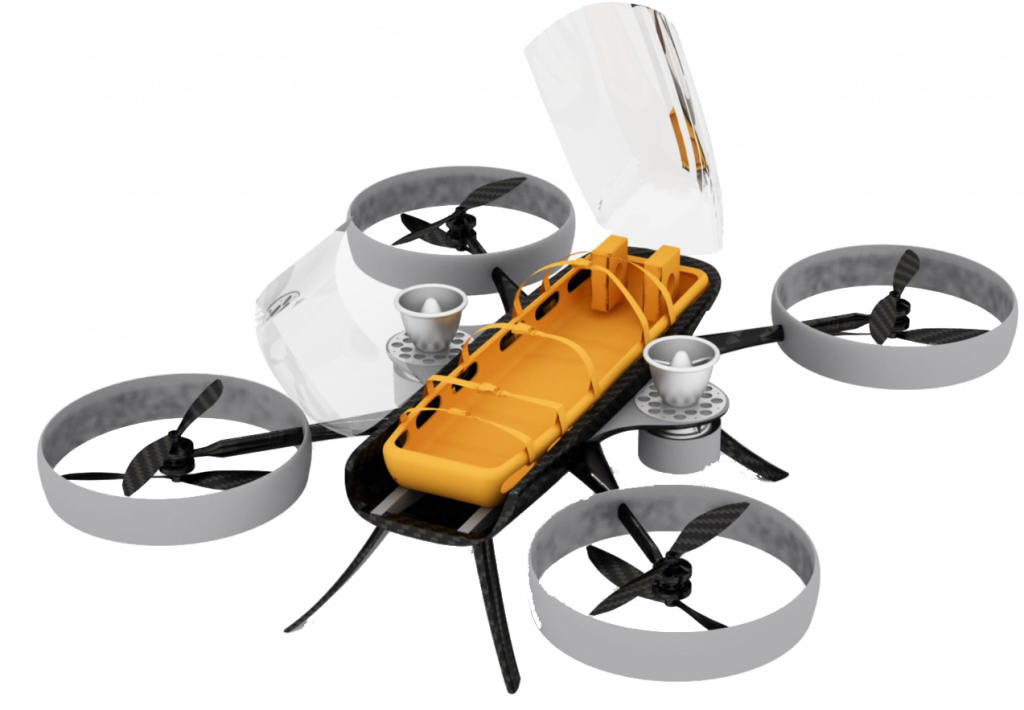 However, it goes without saying that a functional ambulance drone would be a huge boon for society, and it will be exciting to see what Navanteri’s team does with their new 20,000 dollar grant. “I didn’t expect to win this award,” Navanteri told the FAI Expo’s selection committee. “I have never entered this type of competition – I was lucky and we won!” He also added that, even if it’s not quite ready for human passengers, this drone could also be used to transport emergency equipment, medicine, or emergency food supplies into troubled areas.

What do you think, readers? Are ambulance drones the wave of the future? Is Navanteri, as the FAI put it, “an inspirational recipient worthy of the Prince Alvaro de Orleans-Borbon Grant”? Or do you still have some doubts about the applications of this potentially live-saving technology? Be sure to let us know in the comments!