Most drones on the market now do not offer a long flight time, with most not quite lasting half an hour. This is also true for the original Bebop. With the release of the new Bebop 2 Power, there is a flight time of up to 1 hour with optimal flying conditions.

That’s right. Just as the name indicates, the new Bebop 2 Power comes with more battery power, but it isn’t in the way that you would think. This new drone actually comes with two batteries in the package. When purchasing it, don’t have the expectation of 1 hour of uninterrupted flight because you will need to switch out batteries mid-flight. With each battery offering around 30 minutes of flight when in optimal flying conditions, that’s still a pretty impressive time to be in the air. 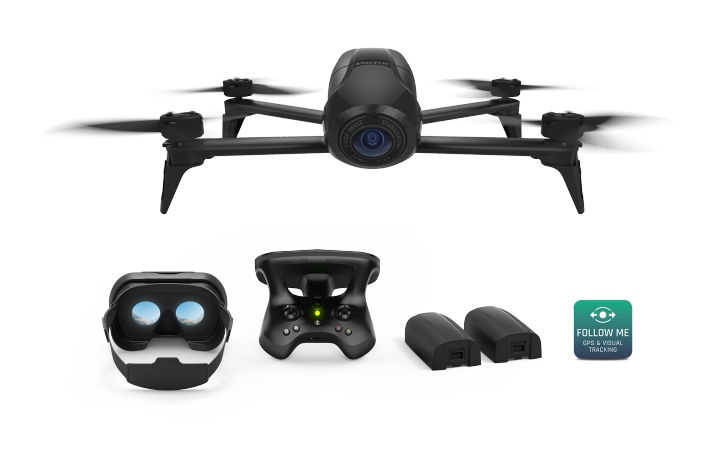 The Bebop 2 Power weighs in at 1.5 pounds and has the same glossy black finish as the original Bebop. Featuring a 14-megapixel camera with 3-axis digital stabilization and the ability to catch full HD video at 30 fps, this is the ultimate drone to take still pictures as well as record videos. It also has the ability to focus on what is most likely the subject in the frame when you are taking a still shot. When you put it in the ‘Cameraman’ mode, it stays focused on the main subject even as it moves and keeps that subject in the center of the frame automatically. 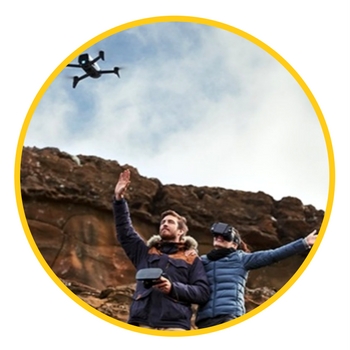 In addition to having a longer flight time, the new Bebop 2 Power has also made improvements to its piloting. It has new visual tracking modes that uses GPS and AI-powered object recognition to make sure you’re still in the shot. It can also use GPS positioning to take incredible videos with pre-programmed camera movements like the ‘Tornado,’ ‘Orbit,’ ‘Boomerang,’ and ‘Parabola.’

If you like to get first person action when flying a drone, the Bebop 2 Power features a FPV headset. This allows you to attach your smartphone, of course once you’ve downloaded the app, and see the view from your drone’s perspective. This is great for those that enjoy seeing their flight in action versus videoing their experience and watching at a later time.

If you’re into thrills or you like to video sports, the new Bebop 2 Power features an impressive speed. This new drone can travel up to 65 km/hr. That’s perfect to catch incredible plays on the sidelines of football games or record plays in action at various sporting events.

The new Bebop 2 Power by Parrot has also done something else that they haven’t done in the past. They have included all of the extra accessories in the box with the drone for one price. This is much better than buying each one separately, which ultimately costs the pilot much more money in the end. The Bebop 2 Power includes the drone, two batteries, the Parrot Skycontroller 2, and the FPV headset all for around $599.

Want to know how the Bebop 2 Power stacks up against Parrot’s newest drone? Check out our comparison article here.