The vast majority of drones are quadcopters – aircraft that use four rapid propellers, oriented parallel to the ground, to maintain altitude and move through the air. It’s such a common design that many people think that the term “quadcopter” and the term “drone” are interchangeable, even though “drone” simply refers to any unmanned aerial vehicle and may include octocopters, helicopters, and fixed-wing drones.

Now, it also includes this:

This ridiculous-looking vehicle is the DelFly Nimble. Its design, based on the high-speed escape movements of the common fruit fly, involves two 14-centimeter wings that flap 17 times per second. And while it may look silly, the science behind the design is actually very smart, and may be the first step towards more efficient UAV technology.

Biomimetics is the school of thought that believes technology should be created to imitate natural functions and processes. This can be done for a variety of reasons, two of which apply to the Nimble.

First: creating a drone that flies like an insect helps us better understand the mechanisms that allow insects to fly. The Nimble’s four wings are operated by a pair of motors that mimic the complex flapping patterns of winged insects. The left and right wing pairs flap independently, and when flown by a pro they can allow the drone to perform 360-degree flips, loops, and the ever-popular barrel roll. 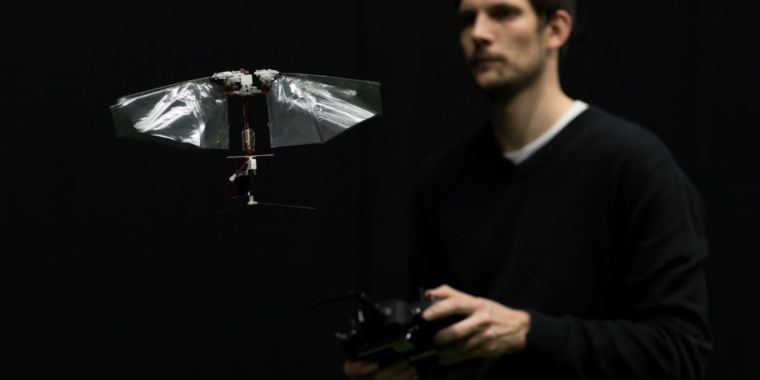 As DelFly’s head designer, Matej Karasek, explains: “One thing we cannot do with real insects is to look into their brains while they’re flying…We can observe what they’re doing, how they move their wings, but we don’t really know why they are doing that. And this is something we can do with our robots.” Biologists at the Netherlands’ Wageningen University, led by Professor Florian Muijres, are using the vehicle to simulate and study the wing motion patterns, aerodynamics, sensory systems, and neuro-motor systems of insects.

However, the other rationale for biomimetic design is that it can often improve efficiency. The premise: evolution has had millions and millions of years to perfect the fruit fly, discarding biological designs that didn’t work in favor of the eventual four-wing, two-pair control scheme. It’s reasonable to assume that this process means the design provides efficiencies that can’t be found in a traditional quadcopter.

Early results are quite promising. The touching and parting of wings (known as “clap-and-fling”) significantly increased lift production, meaning that the drone can get higher with less power. In its current state, the 29 gram, 33 centimeter wingspan drone can fly for more than 5 minutes on a fully-charged battery with a range of more than 1 kilometer. It can reach top speeds of about 25 kilometers per hour (~15.5 mph) and could carry an additional payload of up to 4 grams, which is enough for a small camera or sensor. 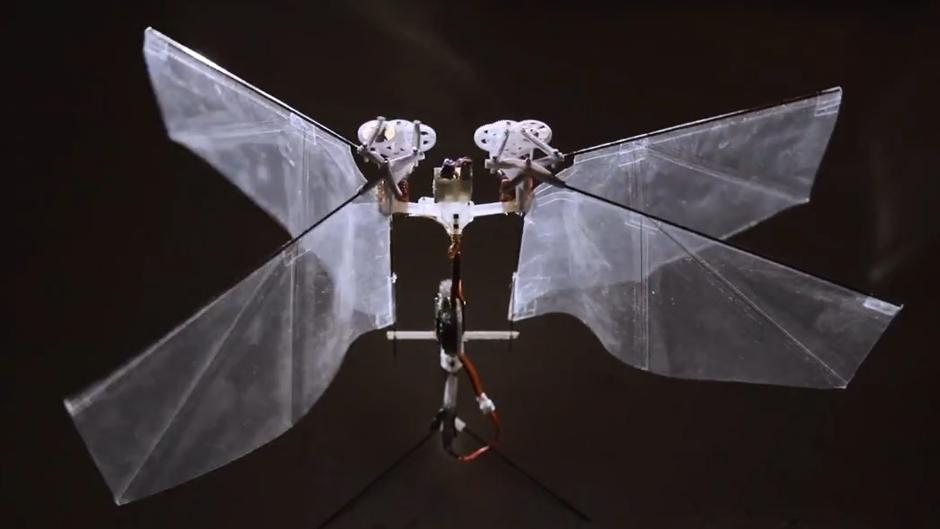 DeFly says that the drone is ready for real-world applications and tasks and suggested monitoring warehouse stock as one possible use. They’ve also said that their future goals are to improve the efficiency of the drone and to eventually create a Nimble-like aircraft that’s the size of an actual insect (which would be the smallest aerial vehicle ever built.)

There’s no denying that this is a seriously cool piece of drone technology, and who knows – maybe it will lead to some fantastic future innovations in the consumer drone market. But for now, we’re a bit skeptical of the idea that the Nimble is really “ready for real-world applications.” That five-minute battery life combined with the difficulty of having to learn an all-new control scheme is going to scare away a lot of DeFly’s potential customers.

But what do you think, readers? Is this the future of drones or simply a novelty item? Let us hear your thoughts in the comments below!