The Royal Canadian Mounted Police started using Unmanned Aerial Vehicles to help them with their work on collision and crime scene investigation. It allows the investigations to be conducted under all weather conditions and provides broader views than the traditional procedures. 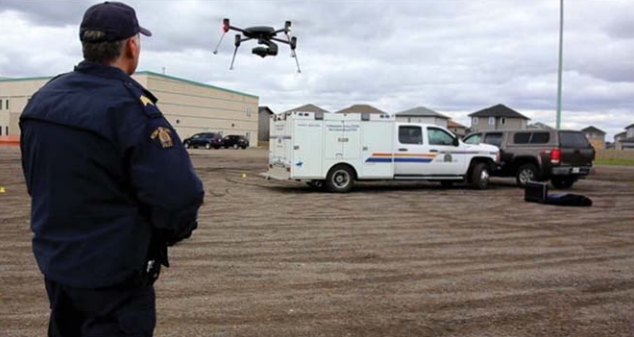 This past September, an experimental project was organized by the Royal Canadian Mounted Police (RCMP) and Pix4D, using Draganfly UAV models to acquire images of a staged car accident scene fromlow altitude. The images were processed by Pix4Dmapper to reconstruct the three- dimensional scene.
In this article, we compare the time spent and accuracy between UAV mapping and traditional procedures, including laser scanner.

The project aims to propose a solution protocol for accident scene investigations. Additionally, by including the accuracy and reliability of the output results, it ensures not only that the whole process is efficient and accurate but also that the reconstruction results can be eventually used as admitted
evidence in court.

The project took place in Regina, Canada. A staged car accident scene was set up to reproduce a crash of two vehicles with a person fallen out of one of the vehicles. The RCMP took photographs and measurements before anything was moved. The yellow plastic evidence markers indicated where each piece of evidence was found.

A UAV model from Draganfly was used to acquire images with very high overlap and ground sampling distances of 0.9 centimeters. The UAV acquired oblique photos by flying a few circles around the scene as well as nadir photos with grid flight plans above the crime scene. The flight lasted between ten to twenty minutes. A total of 212 images were obtained during the flight.

A few on-site measurements were made by the police. GPS measurements of the object corners and the evidence markers were used as ground control points, and tape measurements between the markerswere recorded for further assessment of the final results.

Pix4Dmapper’s total processing time was approximately two hours on a laptop with a core i7 and 8GB RAM. A densified point cloud, digital surface model (DSM) and orthomosaic were generated. Annotation and measurements were directly made in the software user interface.

The total pre-flight preparation time was approximately ten minutes. The Dragan UAV weigh less than two kilograms and thus is light enough to be easily unpacked and operated by a single person. Once the flight plan set, it took less than twenty minutes to complete the designed flight. For the proposed protocol, the entire on-site process time is estimated within thirty minutes, excluding optional measurements. Nadir images taken with grid flight plans achieved high overlaps and eliminated systematic errors. A few circular flights were performed to obtain oblique images of the most focused area in order to cover as many facades as possible. With a flying height of approximately forty meters above the ground, images with a ground sampling distance of less than one centimeter were collected. These images provided accurate and detailed information of the collision. In order to improve the global accuracy of the final results (which is optional), several points were measured with kinetic GPS and total station. These points were picked from corners of the vehicles, the feature objects, and the evidence markers. They were imported into the software and used either as ground control points, manual tie points or check points.

In addition to the measurements mentioned above, a terrestrial laser scanner was set up in several locations to scan over the entire scene, to be used for quality
assessment of the UAV results. The laser-scanned point cloud was compared with the Pix4Dmapper point cloud in respect to their density, accuracy and how they fit the actual needs.

Traditionally, the collision investigation workflow adapted by most police departments – including the RCMP – uses tapes, GPS and laser scanners. Tapes and GPS provide a limited number of measurements.They are written down in field books, and it is not easy to recall precisely where the measured spots were located. Plus, these measurements may easily contain manual mistakes and are not accessible in all situations.

Usage of laser scanners is expensive and time consuming, and the delicate instruments need to beoperated by trained professionals. Some other issues to take into consideration are the obstruction of laser beams and the difficulty of finding appropriate locations to set up the scanners, resulting in missing point cloud data of extremely important information in some hard-to-reach yet focused areas.

One or a combination of the three principal measuring methods are used depending on circumstances. Sometimes one method is enough to cover the whole scene while in other conditions the combination of two or more of them is required to complete the tasks.

Unmanned Aerial Vehicles have become the most practical solution in many urgent cases. They can be used to search and save survivors in the wilderness, to collect updated photos or videos for monitoring natural disasters, and to reconstruct traffic collision or crime scenes to be presented in court. These are
only some examples of conditions where timeliness is the most critical concern. Flight times are getting better and better due to new great batteries. The combination of UAVs for image acquisition and Pix4Dmapper for converting images into results provides a complete solution to reconstruct accident and crime scenes and solves vital issues not covered by traditional methods. 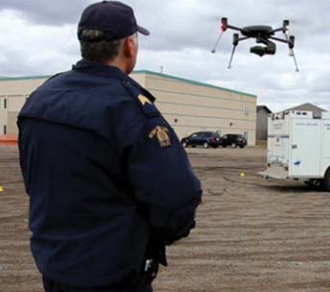 Article Name
UAVs Bring New Dimension In Crime Scene Investigation
Description
The Royal Canadian Mounted Police started using Unmanned Aerial Vehicles to help them with their work on collision and crime scene investigations. It allows the investigations to be conducted under all weather conditions and provides broader views than the traditional procedures.
Author
Zsolt Vaszary