It finally happened, USPS has taken their first steps on the way to drone deliveries. With so many other companies getting in the game, it was only a matter of time before the USPS did as well. It’s a good thing they did too, with big competitors like UPS and Fedex working on their own delivery systems the USPS needs to as well in order to keep up. Even companies like Google and Amazon which aren’t traditional delivery companies are getting in on the drone delivery pie, so the time to be a part of this is now.

The USPS is not quite at the stage of delivery drones just yet; they just put out a request for information in regards to it. This means that they’re actively investigating working with drones and seeing where they fit with the business. It’s a bit disappointing that we won’t see drones streaming out a mail truck anytime soon, but this is an important first step to making that a reality. It also shows they’re doing their due diligence and likely looking to see if the costs to operate the drones would be offset by efficiency gains.

Right now, the USPS is likely looking at ways that they could integrate drones into their current operations. It’s likely they’ll hire consultants or an outside company to help, but at this time no such hire has been reported. It stands to reason that they’ll first be doing some exploratory work before jumping in and spending the money to start equipping their fleet. 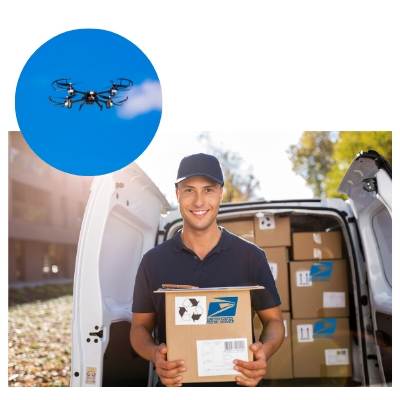 In terms of regulation, the USPS answers to the FAA. The FAA is also responsible for regulating other would be drone delivery services, so this is good news. Lots of progress is being halted by lack of regulation and government red tape, so having an entity so close to the bottleneck might help spur it along more quickly. If the USPS moves forward we’ll probably see many of the other companies mentioned following suit shortly after.

The USPS is also experimenting with a “ride-share” model, where customers can connect with the USPS fleet for business to consumer deliveries. They also have mentioned the potentially ability for 3rd parties to leverage USPS tools and data for things like power line inspections and other tasks drones are well suited for. These would all help the drones serve multiple purposes and likely make them more cost efficient in the long run.

USPS wants the drones to more than just deliver packages though. They’ll also be using the drones to collect three dimensional data for use with autonomous driving vehicles. What it sounds like is that the USPS wants the drones to pull double duty, and collect data that will help autonomous cars and trucks “learn” to drive better. This is probably going to integrate with the USPS’s self driving truck startup TuSimple. This is probably in addition to some of the “ride-share” stuff mentioned above.

It’s good to see the USPS keeping up with its competitors. A big hope here is that the close ties to the government the USPS has will help push through legislation that paves the way for delivery drones. This is one of the main blockers in this field, and having a big player like the USPS considering drones is a great sign. Let’s hope it moves forward, and soon we’ll have drones delivering our packages right to our door.