Watch out drone racers, there’s a new drone on the block, and this one is flying on its own. Recently, the Drone Racing League (DRL), saw its first ever completely autonomous drone racing event, and is staged to have more through the end of the year. Usually racing drones are flown by human pilots, but the drones in this event are programmed to completely fly on their own. This is a huge milestone, and potentially the first step in AI beating humans in a more active, physical task.

The road to this has taken nine teams of programmers from around the world months to complete. They’ve worked hard to come up with the best software to control the drone and help it fly at its best. This is no simple task as their software has to take in all the data the drone sees and make decisions on the fly without human input. With speeds well over 100 MPH for top racing drones, this takes a lot of work to get right, and each drone needs to process tons of data in fractions of a second or risk crashing. The drone debuted in Orlando at the Addition Financial Arena for the racing event.

The drone itself has a very sleek design, looking like a cross between a fish and a bird. This emphasizes and contributes to its goal of being fast. Strapped to the drone is four cameras to help it ‘see’, four different propellers, and a Nvidia processor to run the whole show. The cameras give it twice the field of view as a human pilot, which is sure to prove advantageous in avoiding obstacles.

The drone will participate in a brand new event called the Artificial Intelligence Robotic Racing series. This event will have computer controlled drones racing against each other in a simpler course competing for the chance to take on human controlled drones. The course is simpler than the usual course to start, but it’s likely we’ll see increasing complexity as the technology around flying the drones improves.

The series features four different races where the AI drones will go head to head for the fastest time on the course. At the end, the best computer controlled drone will take on human pilots on December 6th in Austin Texas. 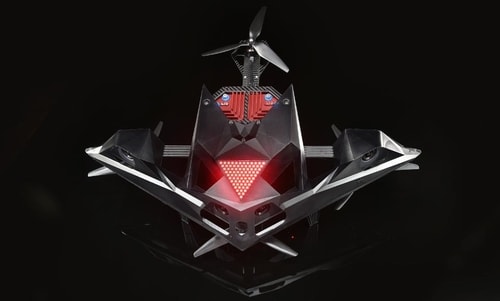 This is going to be a very interesting event as AI has a long way to go to beat humans in this type of event. Sure, computers destroy humans at things like Chess or video games like StarCraft, but drone racing is a much different domain. This is the first instance of an AI designed to beat humans at a physical sport, previous AIs are much more focused on games of the mind. It will be interesting to see how the drones perform overall, as well as how they stack up against their human controlled counterparts.

The implications here are huge outside of drone racing too. The success of this could leak into other sports and physical activities, and we may see drones and AI being used for a much larger range of tasks. Robotic sports might be just around the corner; drone powered AI racing might just be the first glimpse of a huge market.

This is sure to be an exciting few months for drone racing enthusiasts as they wait to see the progress of the AI powered drones. It will be even more exciting to see the top drone face off against a human pilot, and see which one will take home the glory of victory. Will the AI dethrone humans as the champions of the Drone Racing Leauge? We’ll have to wait until December to find out!