In January of this year, we suggested that underwater drones could be the next big thing to take the industry by storm, based primarily on how many companies were showing off submersible products at CES. Now it seems like that prediction could be coming true, at least in part, as a major Navy-funded research project has just been announced that will create a drone which transitions seamlessly between swimming and flying. 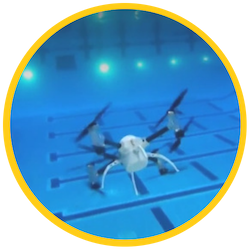 The project is being completed at Rutgers University and is headed by Department of Mechanical and Aerospace Engineering professor Javier Diez. Diez had been experiencing with the concept for years, hoping that the technology might be able to improve the efficiency of search and rescue operations, monitor the deadly effects of oil spills, and help the Navy find and disable underwater mines more quickly. But even he didn’t expect the Office of Naval Research to fund his work to the tune of 618,000 dollars almost immediately after presenting it, saying to Rutgers that “They told me they’d never seen anything like it.”

Like many experimental drones, this model was partially inspired by natural evolution. “There are birds that dive into water,” Diez says, “and fish that fly. [But] waterfowl are still better at flying than swimming, and flying fish are still better at swimming than flying. Our device is equally adept at both.” This inspiration is visible when the drone flaps like a bird, which helps it travel longer and avoids the constant buzzing of

The team’s first attempt to create a smooth water-to-air transition involved placing an inflatable ring around the vehicle that could bring the drone up out of the water, a solution which worked very well in still waters but was a letdown in natural situations. So the team re-evaluated the propulsion system, eventually creating an 8-propeller system that can move the drone through the air AND bring it up from the water.

What’s next for the project now that there’s money burning a hole in Diez’s pockets? Well, the biggest problem is that the current drone model – the one demonstrated to the Navy – has to be tethered to the controller by a thin wire. This is necessary because the radio signals typically used to control drones cannot penetrate the water.

Diez’s plan is to have his engineers study the ways by which vehicles can be controlled acoustically. Sound waves, unlike radio waves, can penetrate the water easily. He’s confident it won’t take long, too: “By next summer, we plan to demonstrate a vehicle that can swim in a seawater environment and do complex maneuvers. At that point, we’ll start to outfit it with whatever sensors the Navy wants to have, such as cameras and sonar detectors.”

In addition to these sensors, the drone also needs an improved battery capacity, the ability to carry heavier payloads, and improvements to the aircraft’s robustness, ease of operations, communications system, and speed. To carry all of this, it’s also going to have to be made substantially bigger, which means re-calibrating the propulsion propellers yet again. Nevertheless, the team seems confident in its ability to deliver on-time and on-budget.

What do you think, readers? Concerned about the US military’s constant expansion of its drone arsenal? Think complex underwater drones might be the next big thing? Are these engineers hopelessly optimistic, or are they genuinely onto something? Be sure to let us hear your thoughts in the comments – and as always, keep the discussion respectful!