It’s important to check the drone laws that apply to your state before flying. If you have specific questions about the regulations or want further consultation, refer to this list of contact information for each FAA region. The regulations for FAA certification apply in every state, and some states have no additional laws on top of that.

For all states, if you are flying your drone within 5 miles of an airport, you must contact air traffic control or airport management.

Iowa – The use of an unmanned aerial vehicle for traffic law enforcement is prohibited. More details

Kansas – The use of a drone on airport property is not allowed unless you have the written consent of the director.You also may not operate a drone less than 350 feet above private property and are liable for any damages that occur. More details

Indiana – Registered sex offenders are prohibited from using a drone to spy on someone. More details

Michigan–Commercial and recreational drone use allowed if federal laws are followed. May not interfere with police officers, firefighters, paramedics or search and rescue personnel. More details

Minnesota – The use of drones within 4,000 feet above the Boundary Water Canoe Area Wilderness is not permitted unless authorized by the Forest Service. No drone use allowed in the public city airspace of St. Bonifacius. Minnesota’s regulations are strict on the avoidance of flying with a suspended or canceled certificate of registration; they also don’t allow misconduct while flying a drone such as flying in a manner that is in disregard for the safety of persons or property. More details

South Dakota – The use of drones over a correctional or military facility is prohibited. More details

Wisconsin – You may not interfere with lawful hunting, fishing or trapping with the intent of taking their animal. Operating a drone over a state correctional institution and its grounds is also not allowed. More details

Colorado –Unlawful to use a drone to look for, scout or detect wildlife as an aid in the hunting or taking of wildlife. More details

Idaho – No person may use a drone to photograph or otherwise record an individual, without such individual’s written consent, to publish or publicly disseminating. More details

Montana – The interference of a drone with wildfire suppression is prohibited. More details

Utah – You may not harass or chase livestock with a drone unless you are the owner of that livestock. More details

Washington – May not operate drone in any park except in a designated area or unless authorized to do so by a permit. More details

Louisiana–Before flying a commercial drone for agricultural purposes, you must complete an agricultural education and safety training course and then submit a written application for review by the commissioner. More details

New Mexico – Unlawful to use a drone to spot the location of any protected species of animals. Also, unlawful to operate a drone within 500 feet of critical infrastructure in New Mexico. More details 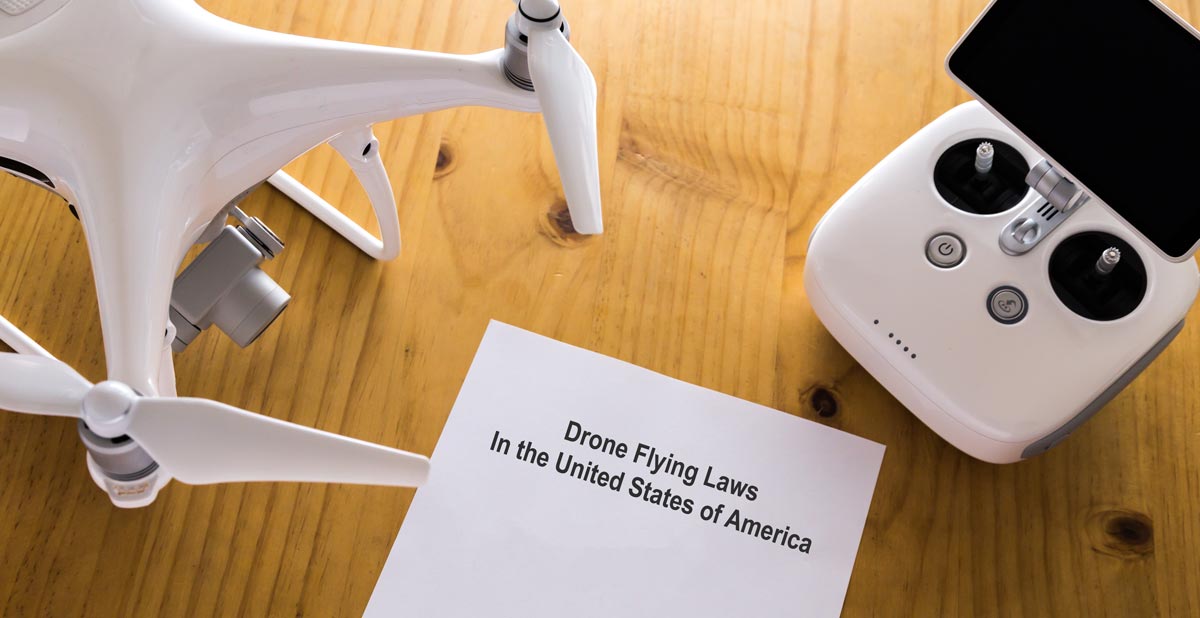 Delaware – Illegal to fly over events of over 5,000 people. More details

Maryland–Prohibited to knowingly fly a drone within 1000 feet of a correctional facility or above another person’s land without permission. More details

New York – May not operate a drone upon or in the airspace within one mile of events in the Town of Orchard Park or within three miles of the Ralph Wilson Stadium Complex. More details

Virginia – Unlawful for any person to use a drone to spy on another person on personal property. More details

West Virginia – Authorization is required to fly a drone in any state parks. More details

Connecticut – No additional laws in place besides to prohibit the enactment of additional drone regulations. More details

Alabama – The use of drones over city property is prohibited. More details

Kentucky – Illegal to equip a drone with a lethal payload, unless flown by the US Army. More details

Mississippi – Prohibits the use of a drone to peep on an unaware person. More details

South Carolina – You may not fly a drone in Mount Pleasant Memorial Park. You may fly in the National Wildlife Refuge System and surrounding areas as long as their strict rules are followed. More details

Tennessee – It is strictly prohibited to fly within 250 feet of critical infrastructure for the point of surveillance. More details

Arizona – Your drone cannot interfere with authority and flying it within a dangerous proximity of another person is considered disorderly conduct.

California – Emergency responders are not liable for any damages caused to your drone if it gets in the way. More details

Nevada–May not fly above or around critical facilities. More details

FAA regulations must always be followed along with your state’s laws. Flying near an airport or military facility is never okay. Try using a designated park area for recreational drone flying.

Other Interesting articles in "Drone Laws"